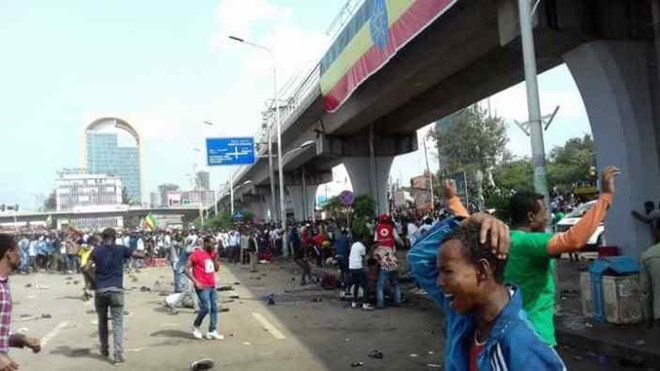 A grenade exploded on Saturday moments after Abiy had finished addressing the crowds, who had turned out to back his push for radical political and economic reforms, including a peace deal with arch-enemy Eritrea.

Thirty people have been arrested on suspicion of involvement in the attack that killed two and wounded 156 in Addis Ababa’s packed Meskel Square. Nine police officers have also been detained over the security lapse, officials said.

U.S. Under Secretary of Commerce Gilbert Kaplan made the offer while talking to Ethiopia’s minister of foreign affairs, Workneh Gebeyehu, on Monday, Fana added.

There was no immediate confirmation from the U.S. embassy in Addis, or from Washington. Ethiopia is one of Washington’s main allies in the region, particularly in the fight against militants in neighboring Somalia.

Security officials have not said publicly who might be responsible for the attack.

Abiy took office in April, pledging to bring more transparency to government and reconciliation to a country that has been wracked by political unrest since 2015.

Ethiopia has released thousands of jailed dissidents since the beginning of the year. Major policy shifts include the partial privatisation of Ethiopia’s state-run telecoms monopoly and state-owned Ethiopian Airlines, loosening the government’s grip on the economy.