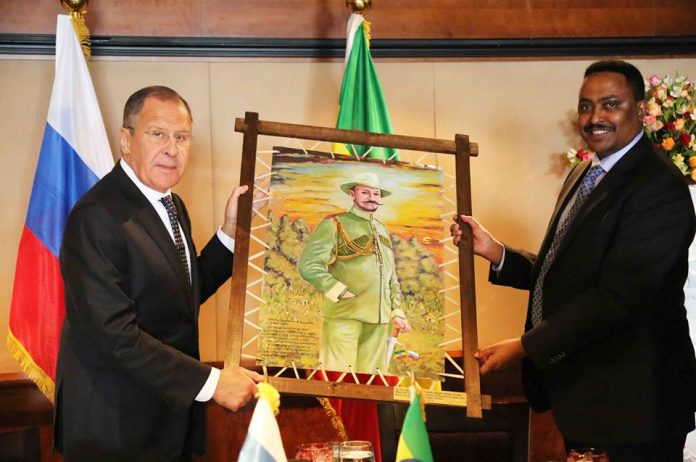 Russia’s Foreign Minister, Sergei Lavrov, who is on a working visit to Ethiopia, met with Foreign Minister Dr. Workneh Gebeyehu on Friday (March 9). Dr. Workneh noted that the official working visit of Mr. Lavrov to Ethiopia is a special occasion “as this year marks the 120th anniversary of the establishment of official diplomatic relations between Ethiopia and Russia and the 122nd anniversary of the Victory of Adwa, which was a bitter struggle for African independence.”

Underscoring the longstanding and multifarious relations between Ethiopia and Russia that spans 120 years, Dr. Workneh said, “Ethiopia will attach very strong feeling to cherish this historic relation with the people of Russia. We remember that despite the huge physical distance that separates Ethiopia and Russia, Russia has supported our epic African struggle for sovereignty and independence. That is why we say our ties are irreplaceable.” Russian Foreign Minister Sergei Lavrov, reaffirming Dr. Workneh’s statement, expressed his gratitude for the warm welcome and hospitality accorded to him and reiterated the fact that “the relations between our two countries, indeed, are rooted in decades and decades of friendship and solidarity.”

The two ministers deliberated in depth on ways of further bolstering Ethio-Russian diplomatic relations in the areas of trade and investment, education, nuclear energy, humanitarian affairs, people to people relations and aviation diplomacy through Ethiopian Airlines, as well as coordination of their common efforts in international organizations.

Touching upon the economic relations between Ethiopia and the Russian Federation – trade and investment, in particular, Dr. Workneh, told Mr. Lavrov that “Ethiopia appreciates the economic support of the Russian Federation, which includes the cancellation of huge of debt in the past.” He added that the two countries should work closely to increase the trade and investment volume in a way that it ensures that there are more Russian companies investing in Ethiopia.

With regards to the enrichment of nuclear energy in Ethiopia, Dr. Workneh, recapitulated the fact that the two countries have recently agreed to cooperate on the utilization of nuclear energy for development. He stressed that this endeavor is geared towards ensuring the energy security of the nation. This, Dr. Workneh underscored, is an epitome of the intergovernmental commission created recently to accelerate the pace and range of cooperation between the two countries. Attesting to this very fact, Dr. Workneh reasserted that “Ethiopia and the Russian Federation have advanced a commandeering relationship, and Ethiopia appreciates Russia’s steadfast support in science and technology.”

As Ethiopia is a non-permanent member of the UNSC and the Russian Federation one of the permanent members of, Dr. Workneh said the two countries could work closely in humanitarian issues, peace and security as well the fight against the scourge of terrorism. Paying due attention to Ethiopia’s time-proven capacity in effectively combatting the looming threat of terrorism as well as peace keeping and building initiatives in its neighborhood, Dr. Workneh drew attention to Ethiopia’s significant roles in the promotion of regional peace and stability.

It is to be recalled that Foreign Minister Dr. Workneh had also visited Moscow in June last year.