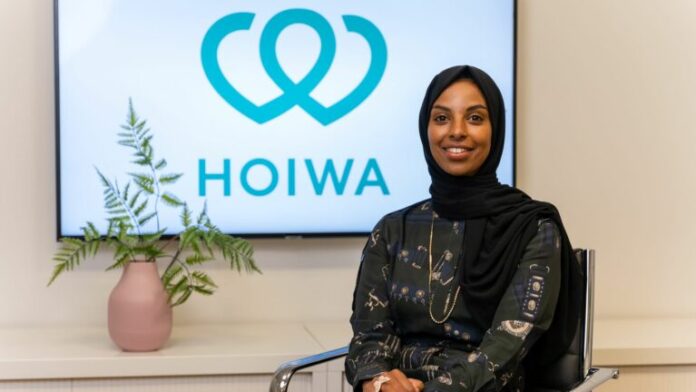 Fadumo Faisal Ali , the daughter of The Somaliland opposition Party Ucid leader,  Eng. Faisal Ali Hussein aka (Faisal Ali warabe) , two years ago she was quitting her job as a nurse and starting her own business, people told her she was crazy. Now her company, Hoiwa, has a turnover in the millions of euros.

Fadumo Faisal Ali’s company, Hoiwa, is an agency that provides nurses to healthcare and medical treatment units and plans improvements for the service level of home-based care. The company’s office, founded in 2020, already has a headcount of ten and 2,500 healthcare professionals on its list.

In 2020, the agency’s turnover was half a million euros and in its second financial year it was already 4.2 million.

“I’m grateful to Finland, the country I arrived in 32 years ago as a little girl. This country has given me amazing opportunities, and I’ve tried to use them as best I can,” Fadumo Ali said in her speech on Tuesday, when she was awarded Espoo Entrepreneur of the Year.

“Even refugee children can find their own path in Finland and generate good for a lot of people.”

The Espoo entrepreneurs who chose Ali for the award said that Hoiwa Oy has employed many immigrants, who face difficulties in finding work. Another reason for the award was that the agency is able to offer its employees above-average pay and good working conditions.

“This recognition shows that even refugee children can find their own path in Finland and generate good for a lot of people,” Fadumo Ali said in her speech.

She also said she wants to make a difference to ensure that where you come from does not matter in Finland.

“So that everyone has the opportunity to dream, run a business and succeed. So that as many people as possible can feel that hard work is rewarded.”

Starting out as a business owner was not easy, however. When she started out, Ali was a single mother of four and beginning studies to become a diabetes nurse.

“Scheduling is a challenge, but I have to strike while the iron is hot now that my business has got off to a good start,” Ali said in a 2020 interview with Suomen Yrittäjät.

Her company was in high demand right from the start, as there was an acute need for nurses in the spring of 2020 during Covid. That demand levelled off in the summer, and nurses went elsewhere for summer work. In the autumn, the company had to ramp its operations up again. As a small operator, it was difficult to gain a position as a recognized subcontractor.

One of Hoiwa’s first subcontracting agreements was bad, too.

“I won’t be turned into cheap labour. I went to talk to the client face to face and negotiated with them to get all of my terms into the contract,” Ali said in 2020.

Ali, who has lived in Finland since early childhood, told Suomen Yrittäjät in 2020 that she has faced prejudice. She did not manage to open a business account with the first bank she talked to but was never told why she was unsuitable as a business customer.

Her language skills were also tested.

“They want to see if I can say and understand everything. The assumption is that I don’t speak Finnish and that I can’t stick up for myself. Those assumptions usually evaporate when I meet a client in person and people get to know me. I have a strong personality and I’m a straight shooter,” Ali said in 2020.