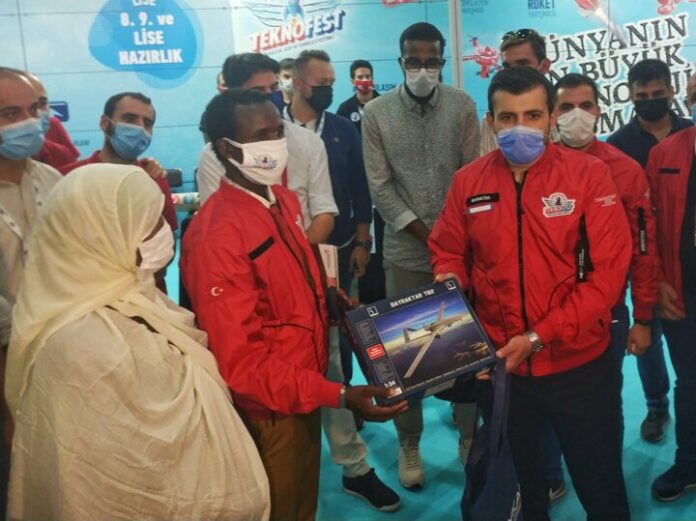 A talented 17-year-old Somali boy is being hosted by the Turkish Foreign Ministry to attend Teknofest, the country’s largest aerospace and technology event.

Guled Abdi who closely examined the aircraft and UAV models in the exhibition centre and took photos used the plane simulator.

Turkish Foreign Minister Mevlut Cavusoglu saw Abdi on the internet and invited him to Gaziantep to join the event. He will now be supported to further his education in Turkey.

Abdi, accompanied by his mother, Maryam Hassan Muhammad, told reporters that he came to TEKNOFEST at the invitation of the Turkish government.

Explaining that the festival affected him very much, Abdi said, “Thank you everyone. I am very happy to see these kinds of things. I consider myself lucky to be here. Today I saw very good things.” said.

So far, Abdi said that can make a small model aeroplane of their own, on its future plans as “not much opportunity in my country, but I want to do something my way. Receive training in this area in Turkey would very much. Hopefully, in the future, I want to build a company that performs the manufacturing aircraft and helicopters. ” used the expressions.

Abdi, who came to the “TEKNOFEST 2020” field with officials from the Ministries of Foreign Affairs and Industry and Technology, was welcomed by Bayraktar at the T3 Foundation stand.

Selçuk Bayraktar, who was closely interested in Abdi and introduced the devices, told reporters that he also made such small models at an early age.

Turkey in terms of the currently much better than that in the case expressing Bayraktar, said:”Young brother’s to make a model in the absence frankly to me at all impressed. Already videos spread vulgar in social media. I think the tika ‘baykara to ETS visit Turkey We have invited TEKNOFEST here as a much more colourful event as it continues. I was happy to meet with him here. There is HAVELSAN, which makes flight simulators, and will visit them. Our brother was 17 years old.”Selcuk Bayraktar