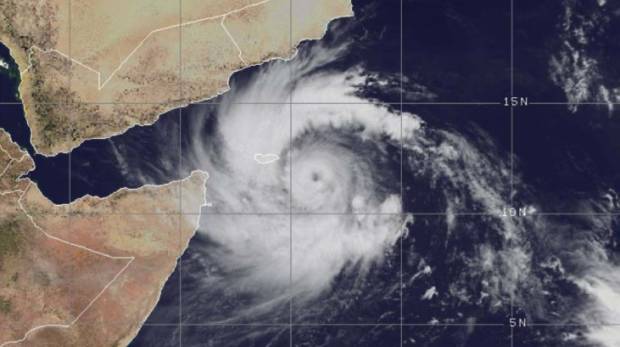 The Inter-Governmental Authority on Development (IGAD)’s Center for Climate Prediction and Application Center (ICPAC) said on Friday that its closely monitoring cyclone Mekuku which comes after tropical cyclone Sagar that caused heavy rains and flooding in Puntland and killed at least 25 people in Somaliland.

“The regional model prediction of the Weather Research and Forecasting (WRF) latest run at ICPAC indicates that the tropical cyclone will move progressively northward and landfall over Yemen late on May 26, 2018,” the bloc said in its alert.

The bloc warned that as the cyclone progresses north, parts of the cyclone circulation and associated clouds and rains will hit along the coast of Somalia.

The warning comes after a powerful tropical cyclone with winds in excess of 120 km/per hour and an entire year’s worth of rain which landed in Somalia last week left destruction and death in its wake in Somaliland, endangering the lives of thousands of children in the region.

According to the charity, Cyclone Sagar tore through the coastal north of the country, destroying homes and livelihoods in its wake.

According to Somaliland authorities, at least 25 people have been killed, 27 others are missing and hundreds of homes destroyed following tropical cyclone Sagar that caused heavy rains and flooding in Somaliland.