This debate may end up being inconsequential. It may even be forgotten by Sunday, when Hillary Clinton and Donald Trump again face off in a town hall format. But it was more contentious than perhaps was predicted.

Tim Kaine’s strategy was transparent from the outset — keep Mike Pence on defense having to answer for each and every one of Trump’s statement.

But he did so by repeatedly interrupting Pence during what seemed like every attempt Trump’s running mate made to answer a question.

Pence largely deflected and, in a cool manner, tried to shift the focus to Hillary Clinton.

He diverted with Trump on some issues, like Trump’s odd praise of Vladimir Putin, while even saying that it was “absolutely false” that Trump called for a ban on Muslims entering the United States.

The press release announcing that proposal is still on the campaign website.

Still, Pence’s visible irritations at Kaine — shaking his head at times, at others using a Ronald Reagan line — probably spilled over into undecided voters.

Kaine came in with canned line and a clear strategy. He tried to tie Pence to a flurry of outrageous comments. But perhaps he underestimated Pence’s ability to stay collected.

Here are the five moments that stood out:

The first signal that Kaine would be an attacker — and not a folksy dad — came early in the debate, as Pence criticized the foreign policy of the Obama administration and Clinton’s tenure as secretary of state.

“You love Russia,” Kaine said, foreshadowing an evening when Putin was mentioned repeatedly.

It was a reference to Trump’s praiseworthy comments about Putin and Trump and Paine’s statements that the Russian president was a stronger leader than President Obama.

Later, Kaine said that Trump looked up to a “Mount Rushmore” of dictators, while Pence dismissed it as a scripted talking point.

Pence several times called Clinton’s campaign an “avalanche of insults,” but he eventually did try to criticize Putin, calling him “small” and “bullying,” while also criticizing US policy. “The provocations by Russia need to be met by American strength,” he said.

Trump, though, has praised potential Russian action in Syria.

Pence did defend Trump in the latest controversy swirling around the campaign — the New York Times report that showed Trump paid no income taxes in 1995 — and perhaps didn’t in succeeding years.

“He used the tax code just the way it is supposed to be used,” he said.

Yet this is perhaps a no-win issue for Pence, because it just emboldened Kaine to repeatedly bring up the question of why Trump has yet to release his returns as other candidates have.

The few minutes free of verbal sparring came when both candidates talked about the role of faith in their leadership. It actually was one of the more compelling moments of the debate that offered some insight into how they approach religion and politics.

Kaine talked about having to uphold Virginia’s death penalty law even though, as a Catholic, he opposes it.

Pence talked about the “sanctity of life,” his opposition to abortion and the importance of adoption.

But it was only a brief moment before the candidates argued over, you guessed it, one of Trump’s past comments.

That was his statement to Chris Matthews last spring that women who have abortions should be punished.

Pence denied that was a campaign policy. Trump is “not a polished politician like you and Hillary Clinton.”

In the waning minutes of the debate, Kaine once again brought up Trump’s comments about Mexican immigrants. It was a clunky response on Pence’s part — one of the instances were he seemed to truly be annoyed.

“Senator, you have whipped out that Mexican thing again,” Pence said.

Kaine didn’t miss a beat. “Can you defend it?”

Moderator Elaine Quijano got some flack on social media for not interrupting enough, doing little fact checking and only a few instance of follow ups. But she did admonish both other them at one point, saying “gentlemen, please,” and at another issuing a warning that their sparring made it impossible for viewers to even understand. Perhaps that can be said of much of this election campaign. 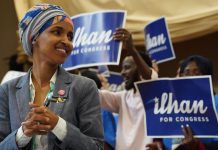 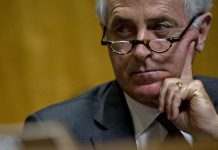 Kenya may have to study Somalia’s new president more