Ilhan Omar, a first-term state legislator who burst onto the national scene during the fight over President Trump’s “travel ban,” has won the Democratic nomination for Minnesota’s 5th Congressional District. It’s a safe Democratic seat, held for 12 years by Rep. Keith Ellison (D), making her the favorite to join the House in November.

Omar defeated two candidates with longer resumes who argued that the Somali immigrant’s rapid ascent had happened too quickly. But Omar enjoyed the support of multiple national left-wing groups, as well as the endorsement of Alexandria Ocasio-Cortez. Over the weekend, she held a campaign rally with Rashida Tlaib, who won an Aug. 7 primary to represent Michigan’s 13th district. Together, Tlaib and Omar will be the first Muslim women in Congress; Omar will be the first Muslim to replace another Muslim in the House. 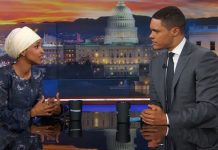 “I am America’s hope and the president’s nightmare”: Ilhan Omar talks with Trevor Noah