Horndiplomat-The President of The Federal Republic of Somalia has said there are plans to reopen Somali National library soon.

Speaking during brief question and answer session at the second Mogadishu Book Fair on Friday, President Sheikh Mohamud has said reopening of the library is key to education development in the country.
“Plans are underway to renovate the national library and open it as soon as possible,” he said.
President Sheikh Mohamud added that his government is committed in the rebuilding of the education institutions in the country in an effort to boost quality education.
“For the past four years we were in the power we tried to renovate schools, provide meals for children in the school to encourage go to school program that we launched,” he said.
Hundreds of people attended the three day educational event organized by the New Horizon.
Scores of young people showcased new books they authored during the three day event.
Several foreigners including former BBC Andrew Harding the author of Mayor of Mogadishu was also present at the Book Fair. 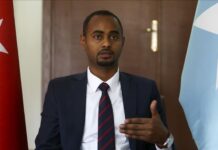 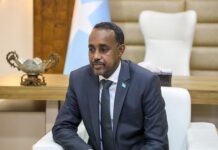