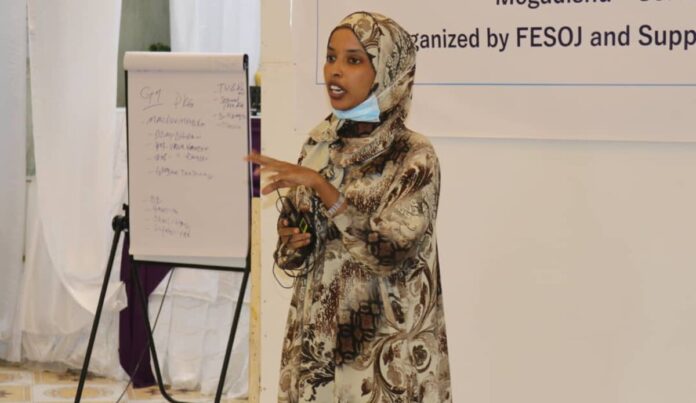 Mogadishu, 8 October 2021 — As Somalia continued with electoral preparations, the month of September saw a round of United Nations-backed training completed for Somali journalists on reporting on elections and the importance of women taking part in the country’s political life.

The UN Assistance Mission in Somalia (UNSOM) provided support to a range of media associations around the country — including the Federation of Somali Journalists (FESOJ), the Somali South West Journalists Association (SOWEJA) and Women in Media Initiative Somalia (WIMISOM) — for the intensive training of some 180 journalists.

“The role of the media is important at any point in time in the public life of a country, but when elections are being prepared and held, that role takes on an added extra weight and significance,” said UNSOM’s Chief of Strategic Communications and Public Affairs Group, Ari Gaitanis, via video call to the training which first took place in the capital, Mogadishu.

He added that the United Nations in Somalia hoped the series of training courses would support Somali journalists in gaining knowledge of elections reporting and in highlighting women’s political participation during this crucial electoral period, especially the importance of achieving the minimum 30 per cent quota for women’s parliamentary representation.

The training sessions took place over three weeks, from 5-29 September, in Mogadishu and various cities of the Federal Member States (FMS), including Baidoa‎, Dhusamareb, Garowe and Kismayo.

With training from seasoned media experts, the journalists gained knowledge and expanded their understanding on election reporting and election-related human rights violations, safety of journalists and countering misinformation, journalists’ key roles in advocating and championing for women’s political participation, and intensifying media coverage for women candidates or political aspirants in the ongoing 2021 elections. 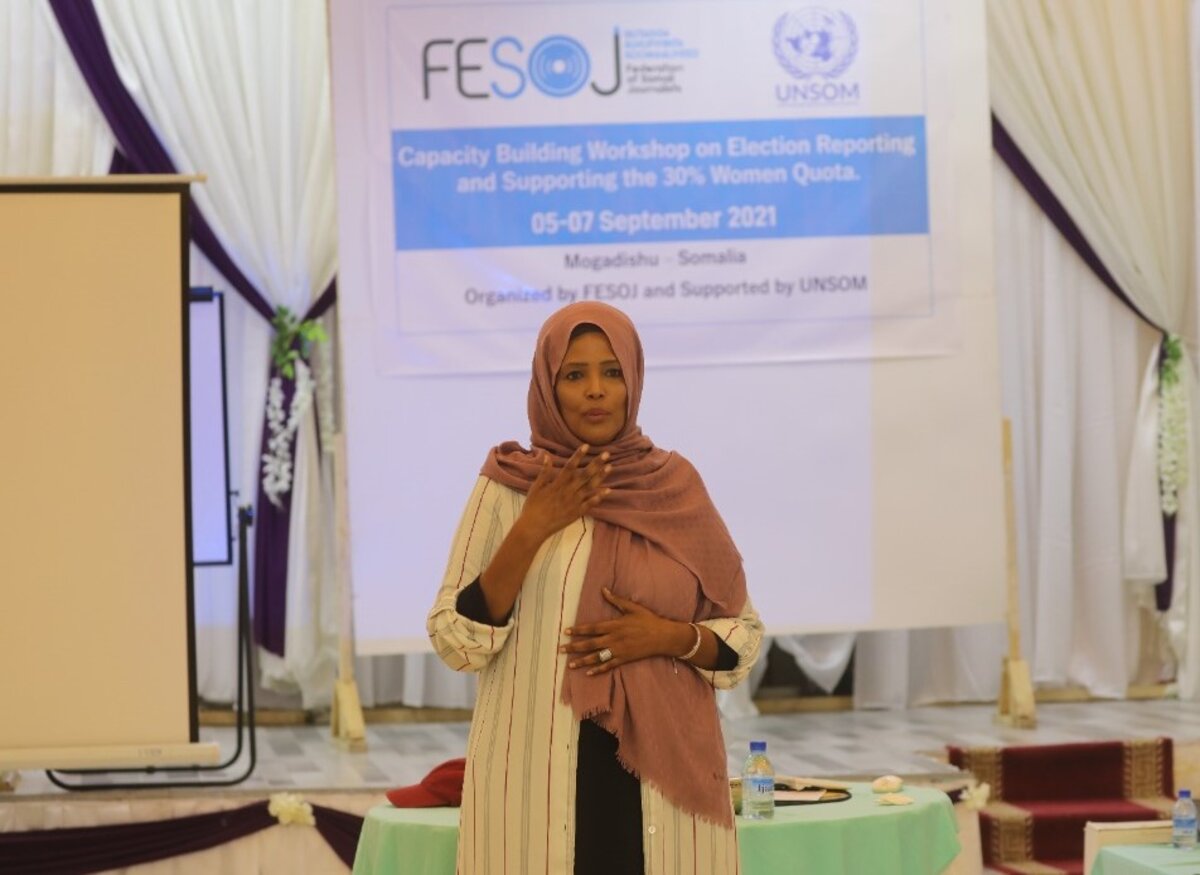 “I gained enormous knowledge in many aspects relating to my career and learned different elections reporting perspectives that can help in intensifying media coverage for women candidates,” said Fardowsa Mohamed Sahal, a Kulmiye Radio correspondent, who participated in a FESOJ-organized training in Mogadishu.

In a similar vein, Maryan Sheikh Abdi, a freelance radio correspondent based in Jowhar, expressed her satisfaction with the training, claiming that it will contribute not only to better coverage of elections but also of community issues in general. She took part in the training in Jowhar.

“We have been given much-needed knowledge that reflects the current situation in the country. Today, I can say that I can confidently contribute to the realization of the quota for Somali women in the parliamentary elections,” the freelance journalist said.

Another participant of the training in Jowhar, Abdullahi Ilaaji, a Radio Asal reporter, said he had learned how to report on elections and broadcasting programmes that focus on the impact that women’s quotas can have on participation.

“I cannot wait to return to my radio station to fast-track these programmes on women’s political participation,” he said.

For some participants, understanding the nexus between Somali women and politics came before reporting on women’s parliamentary quotas.

“First, journalists should get a better understanding on women issues, women empowerment and women’s political participation,” said Sakariye Nur Farah, a Goobjoog TV reporter in Garowe. “Before we begin our campaign to support women, we should persuade ourselves and do the best job we can in helping our sisters get equal representation.”

Echoing her colleagues’ sentiments, Hamdi Mahad Yasin, a producer with Radio Wamo in Kismayo, said that she could use the knowledge and skills she gained from the training to report on women’s political participation and elections in a professional manner. She noted that, after the training, she would diversify the format of her programmes.

“I can now produce drama, news features, debates and discussions featuring women’s political participation and also the 30 per cent quota,” the journalist said.

Rodo Hasan Abdi, a reporter from Radio Barawe who travelled from Barawe to Baidoa to take part in the training, voiced her optimism and satisfaction too: “We’ve had three days of tons of knowledge and understanding.”

The training came at the right time, too, according to KGS TV journalist Shukri Mohamed Abdi in Baidoa, who said that it was the first time she participated in such an initiative.

“I have asked myself several times when we would be receiving special training for women’s political rights, which had never been done,” she said.

In Dhusamareb, a participant from Radio Dhusamareb, Hafsa Khalif, enjoyed the practical exercises that, she said, will help her and her team produce quality programmes.

The training sessions drew high-level representation in most of the cities they were held in.

At the end of the training in Garowe, Puntland’s Deputy Minister of Women Development and Family Affairs, Sahra Abdi Hersi, encouraged the participating journalists to give voice to women candidates and political aspirants through their work.

“Independent and competent media are instrumental for good governance and development. Giving voice to the voiceless is very important during this election time and beyond,” Ms. Hersi said.

During the closing session in Kismayo, a representative of Goodwill Ambassadors for the minimum 30 per cent quota in Jubaland, Sahur Yusuf Baynax, said that journalists and activists — as well as all members of Somali society — have a role in ensuring that the quota is achieved. He asked the media to transfer to their communities the lessons they had learned during their sessions, and to help educated Somali women achieve the quota.

At the Kismayo session, the Director-General of Jubaland’s Ministry of Information, Abdishukri Arab Omar, expressed his appreciation of FESOJ’s efforts in building the capacity of Somali journalists, particularly those of Jubaland. He pointed out that the quality of journalism in the southern Federal Member State had improved.

“I feel that you have learned a lot from this training, I urge you to put into practice the knowledge you have learned during these three days. The effort brought to us by FESOJ-UNSOM comes at a key time of campaigning for the 30 per cent women quota,” Jubaland’s Minister of Information, Suleiman Mohamud Mohamed, said at the same event.

In Galmudug, Bashir Mohamed Salad, a spokesperson for Dhusamareb local government, said the FESOJ-led training had helped empower journalists in Galmudug, and expressed the hope that more such training would take place. 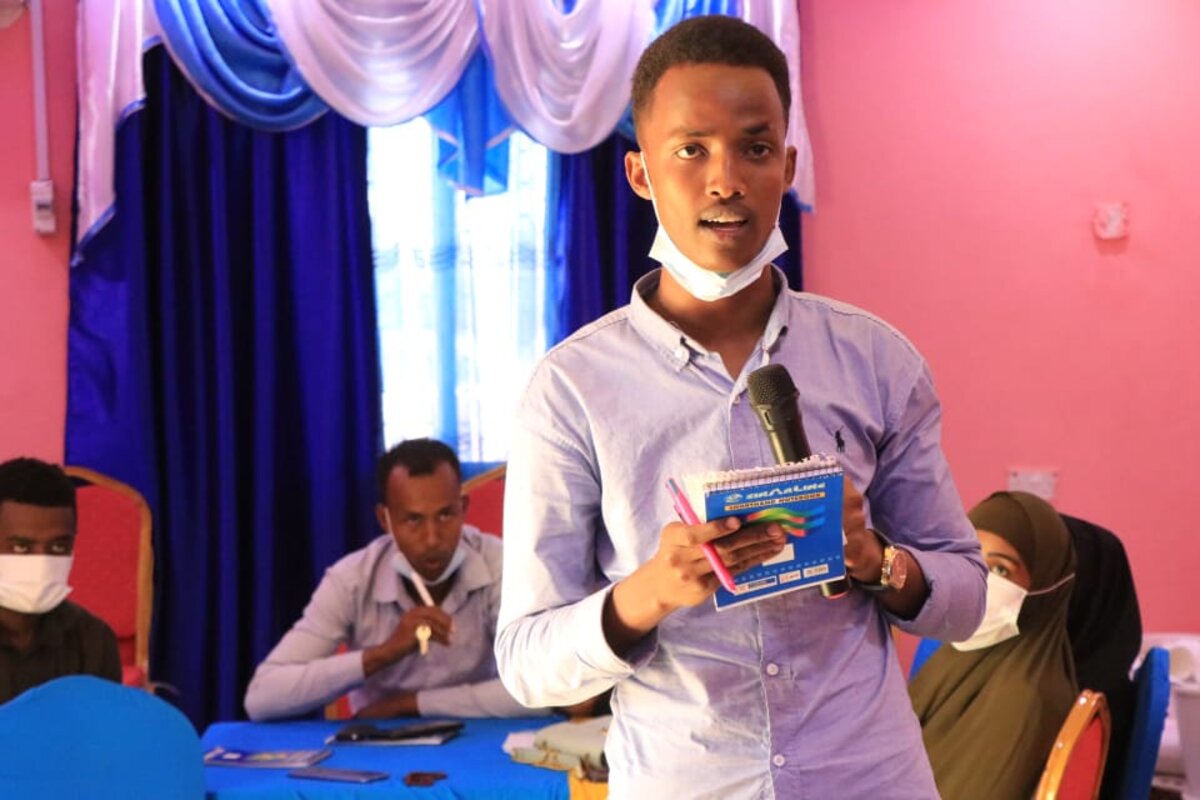 The United Nations supports media development in Somalia through its work with various media associations.

According to the UN Educational, Scientific and Cultural Organization (UNESCO), media freedom and access to information feed into the wider development objective of empowering people, and empowerment is a multi-dimensional social and political process that helps people gain control over their own lives.

UNESCO goes on to state that this can only be achieved through access to accurate, fair and unbiased information, representing a plurality of opinions, and the means to actively communicate vertically and horizontally, thereby participating in the active life of the community.