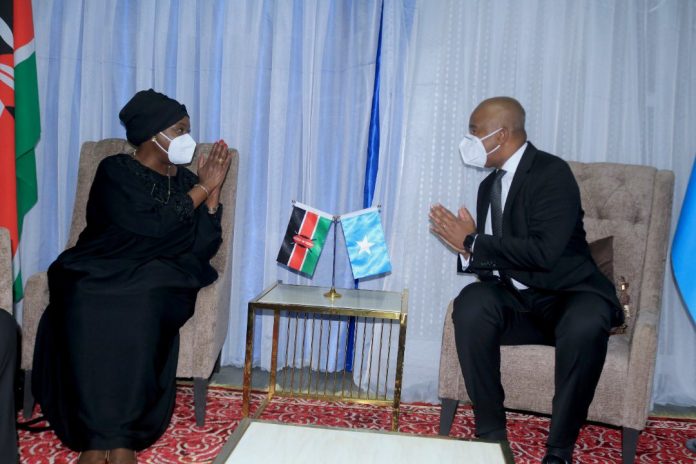 “deed a revitalized beginning for us as we seek to foster our diplomatic and bilateral ties. H.E Omamo would meet with PM Mohamed Hussein Roble for enhanced talks on further strengthening our relations” Somalia foreign minister Mohamed Abdirizak Said

Pleased to have welcomed CS @ForeignOfficeKE H.E Raychelle Omamo to #Mogadishu. It’s indeed a revitalized beginning for us as we seek to foster our diplomatic and bilateral ties. H.E Omamo would meet with PM @MohamedHRoble for enhanced talks on further strengthening our relations pic.twitter.com/D6Bqzt1qvX

Kenya had on July 19, 2021 asked the AU Commission to offer technical assistance regarding border issues with Somalia through a note verbale to the continental commission.

“In this regard, the Commission wishes to communicate that it stands ready to provide technical assistance regarding border matters to all Africa Union Member States through its Africa Union Border Programme (AUBP) upon a joint request.”

“To this effect, the Commission will initiate the process of further consultations between the two parties in the Kenya-Somalia border issues in line with the AU legal instruments,” the note verbale dated July 28 states.

Foreign Affairs PS Macharia Kamau did not respond to inquiries about the visit.

Kenya has been pushing for political negotiations in the dispute against the ICJ route.

In August 2014, Somalia formally asked the ICJ “to determine, on the basis of international law, the complete course of the single maritime boundary dividing all the maritime areas appertaining to Somalia and to Kenya in the Indian Ocean”.

The matter is yet to be concluded following deferments and Kenya’s withdrawal on March this year.

Kenya got alarmed when Somalia displayed contested oil and gas blocks within its territory for auction in London in 2019.