Cultural heritage is the essence of our identity:

Having attended at an event in Hargeisa by Ministry of Trade, commerce and Tourism and Dr Sada Mire; I have learned much of our historic culture and past. This event lectured and commented by number of people broadened my mindset and gave me new directions on the way I looked at our future. I have been compelled to further study on a significant threat particularly to our archaeology.

In my following to speakers and African intellectuals and nationalists educating young Africans on how they could create different mind-sets to reset colonial past prints; it’s noticeable that Westerners fuelled new strategies to monopolize both past and present histories in Africa and bring down the challenging new generations from Africa. My recent observations see that Somaliland is subject to neo colonial archaeology with the help of unqualified locals.

EU representative for Somalia is a Spanish man Mr Nicolas Berlanga and the EU funds are going to Spanish institutions that are monopolizing the archaeological research and narrative of Somaliland. Mr Nicolas Berlanga said in a Washington post article from Feb 1 2021, they are funding Laas Geel project of Somalia. See opportunistic use of Somalia to attract funding when they are speaking abroad at poster. 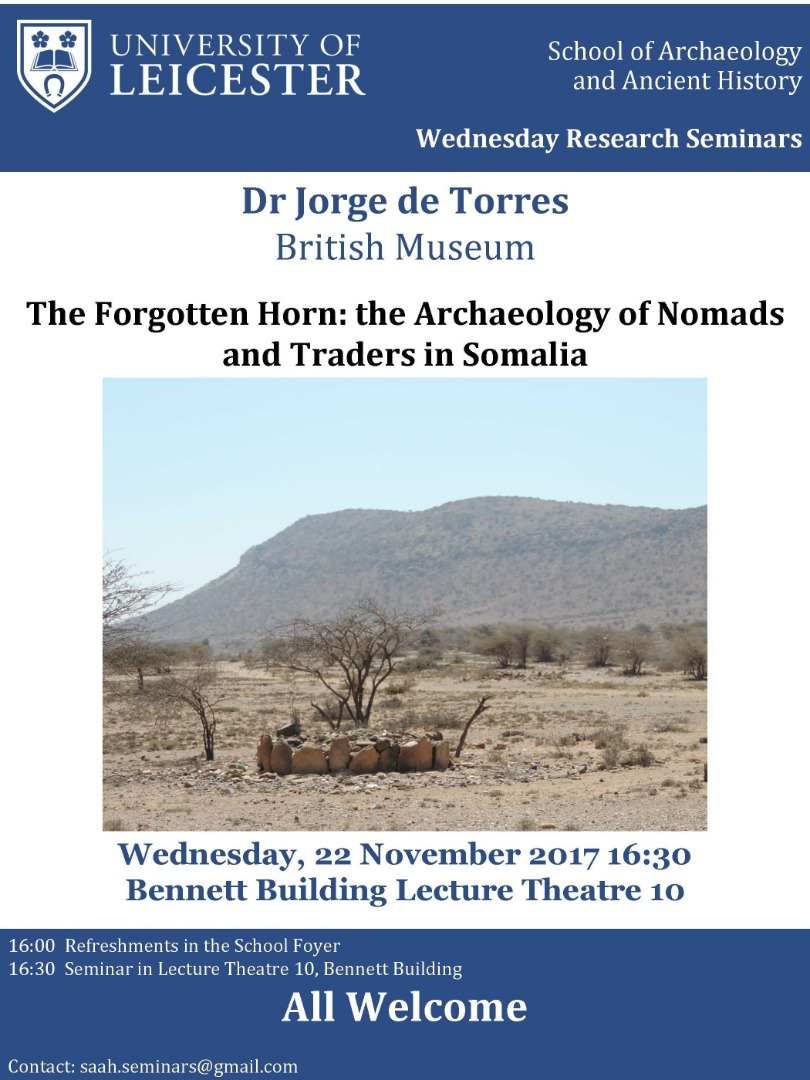 Archaeological sites and artifacts preserved our identity and intelligence through life. Such native historical leftovers represent us in different manners but before Somaliland’s new generations could establish our narrative; foreigners are setting the agenda and denying our independent narratives. There’s only one Somaliland archaeologist who is independent and with international credentials, Dr Sada Mire and they deny her work and omit her contributions to countries’ Islamic era as Dr Sada claimed in her recent book ‘’ Divine Fertility” . See below screenshot from Dr Sada Mire’s book of how Dr Jorge de Torres and Dr Alfredo González-Ruibal concealing the achievement of local independent archaeologists. 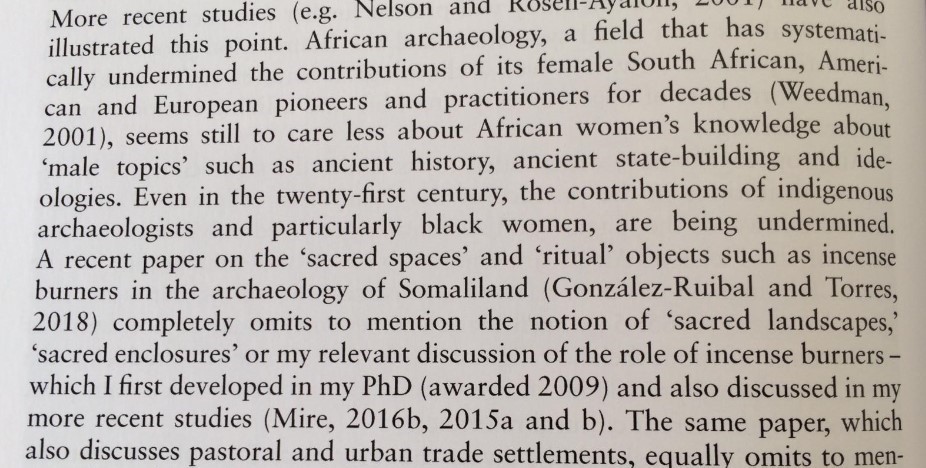 It’s important to articulate these sites and artifacts were always preserved in respect to local traditions and customs that granted them to be protected and safe from millennia till today. Today, when Somaliland is free from oppression and has fresh new generations in our universities, there should not be a space for neo colonial archaeology and our business people and millionaire must stand for investing our heritage, culture and our science.

In Africa, through history it’s learned that colonials monopolized the archaeology which sidelined the involvement of local natives and disregarded educating local in this area of study and maintained the European control over their narrative. Egypt struggled to control the narrative its history and who took control of their archaeology. Egypt is a good example; it confined archaeological sites for their future archaeologists.

The Institute of Heritage Sciences (Incipit) archaeological mission in Somaliland put out a call for Islamic archaeology scholarship only for European citizens. The Spanish “Incipit” project was in Somaliland for the last seven years. They have not prepared a Somaliland person to be able to get a Phd scholarship like this and they say only Europeans can apply for the scholarships funded by the European research council ‘’ERC’’ . 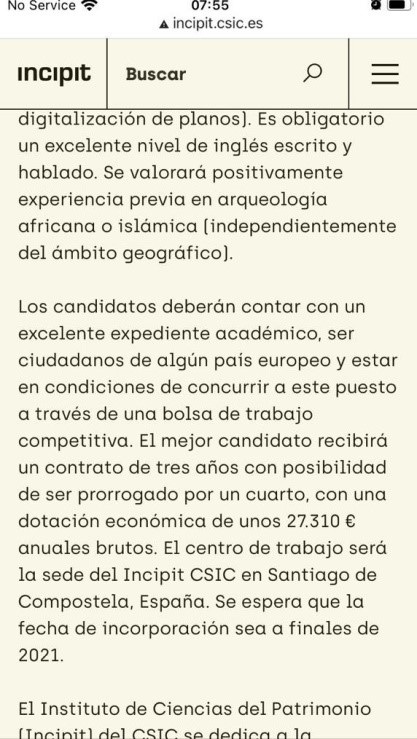 The link below is an event in 2017 that indicates the 10th anniversary of the department of archaeology yet this team says that they supported initiatives to create the department in 2018 whilst them being present in the country only last seven years.

See below screenshots from their website to the above claims; 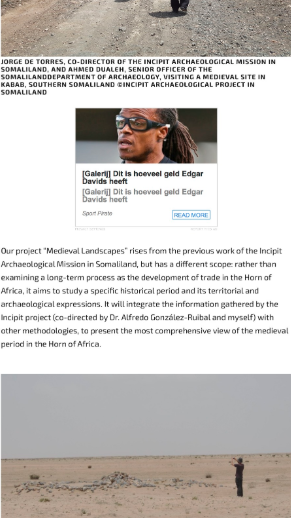 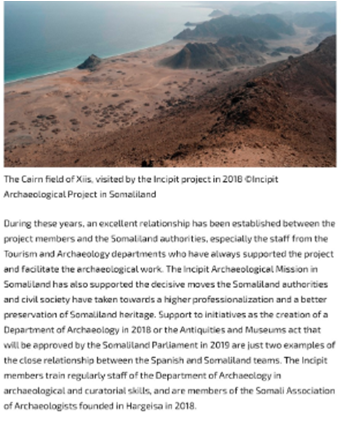 This Spanish team are talking to their people and disseminating in their language and Spanish Media. Persuading their people that they are the only archaeologists on the ground in Somaliland and waving to more of their archaeologists to join, See screenshot below of their tweets. Had they wanted to engage our people; they could have brought in more locals who could have accessed the opportunities of scholarships in this field. 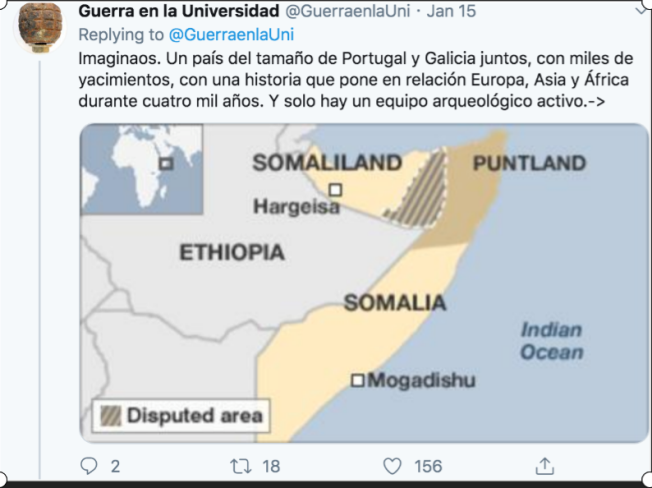 In their brochure, they claim to have excavated and studied over 40 sites. Like in colonial times, this Spanish team is rushing to extract as much data as possible before any archaeological laws are in place in Somaliland and before Somalilanders set their agendas and study their archaeology. ERC is funding Europeans who are continuing colonial archaeology in Somaliland and Africa and blocking upcoming young generations to study and research their heritage. There’s no country where one foreign team can excavate 40 sites.

This is the biggest monopolization of knowledge production in the history of archaeology.  What will the next generation excavate if we let foreigners do what they want? There will be nothing left for any local archaeologists in Somaliland because they are the ones setting the agenda and there will not be independent researchers. By excavating they are the owners of the primary data which our young generation will never have a chance to interpret.

Why EU missions are directing their funds to only European control and patronization? Somaliland universities, independent local and indigenous institutions must be considered without European partners. But will the EU fund independent black archaeologists without their European archaeologist’s control?

Somaliland government must take control of the archaeology, guide foreigners in any operations and should not allow opportunistic locals supporting foreigners who want funds and international media attention to distort our history and archaeology.

Abdifatah Nour has more than 5 years of experience in research, translation
and worked for several NGOs in Somaliland and Ethiopia. He earned a
bachelor’s degree in public health from Ethiopia. Currently and since
2020, works temporarily at vie translate remote online for some health
services providers and patients in India, Malaysia and some US and Canada
hospitals.

My experience & trip in Hargeisa and across Somaliland