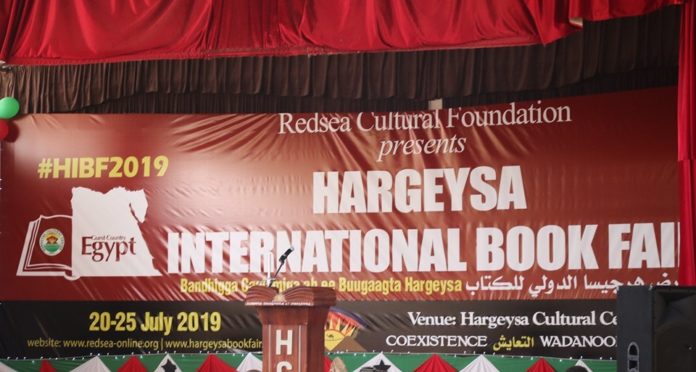 A week of culture, books, poetry, art exhibition and knowledge sharing with delegates from more than 28 countries begin today in Hargeisa,

The Hargeysa International Book Fair is an annual cultural event in the Somaliland city of Hargeysa. The fair, which first ran in 2008, is now arguably the biggest literary festival in the horn of Africa with thousands attending.

The team organizing the festival, now in its 12th year, have made several announcements about the current iteration of the shindig. For one, the dates for the fair are July 20 – 25 and the festival theme is “coexistence.”

The Founder of Hargeysa International Book Fair  Dr. Jama Musse Jama officially welcoming the guests and delegates of this year.

“I would like to thank all our distinguished guests and to give special Thanks to the Vice president of Somaliland who always inaugurates the opening of the book fair” Dr.Jama Musse Jama

The EU Ambassador to Somalia Nicolás Berlanga Martinez delivered his opening remarks at Hargeysa International Book Fair.he said to learn from the history of Europe there were bloody of wars, from the 1950s the founding fathers of EU.

Meanwhile, the German Ambassador to Somalia Annet Gúnter said in her remarks at Hargeisa international bookfair  “Coexistence should not merely be understood as living alongside each other. It should always entail the ambition of finding common ground, making a compromise and build upon it to allow all parties to live together.”Said, German Ambassador

This year the festival partner country is Egypt which has a special place in the minds and living memory of the people of Somaliland. The future prospects of both countries also seem to be equally entangled.

“Egyptians can become a model to African’s in terms of #coexistence we have two identities Arabian and African identity, and we are all from different backgrounds and religions.” Mohamed Ibrahim Nasr

“We are honored to be the guest country for the Book Fair in its the 12th edition, and we are glad that coexistence is the theme because it’s something we African’s need to embrace” — Egyptian Ambassador Mohamed Ibrahim Nasr