According to a press release from the Presidency yesterday afternoon, the President’s talks with Mr. Baker further highlighted the fact that the Head of State sought from Turkey non-partisan treatment as concerns grants to Somaliland and Somalia.

He said, “The Turkish government should show the people of the country non-partisan attitude as concerns Somalia hence development grants and alms extended to the two countries should be of equal proportions and not as the status quo”.

The press circular stated that their talks also pondered on the general political aura of the Horn of Africa region and on the ways and means of bolstering the historic ties of Somaliland-Turkish bilateral relations.

“We met with Turkey’s new Special envoy to Somalia and Somaliland talks Dr. Olgan Bekar, We discussed the issues of the talks and the best way for Turkey to take part in the dialogue.”Waddani chairman said in a Twitter post late on Friday.

On December 2018,The Turkey Government has appointed Dr. Olgan Bekar, former Turkey Ambassador a to Somalia as Turkey’s new Special Envoy to Somalia and Somaliland talks.

The talks began in 2012 when the London Conference on Somalia, held at Lancaster House on February resulted in a communiqué. Pre-talks communique emphasised “the need for the international community to support any dialogue that Somaliland and Somalia’ .
The Somaliland-Somalia hit a deadlock several times over technical issues. Both Somalia and Somaliland governments are keen to resume talks. 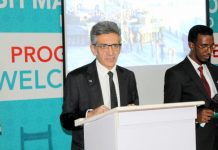