Somaliland Debates – “The Budget and the Public” - Horn Diplomat 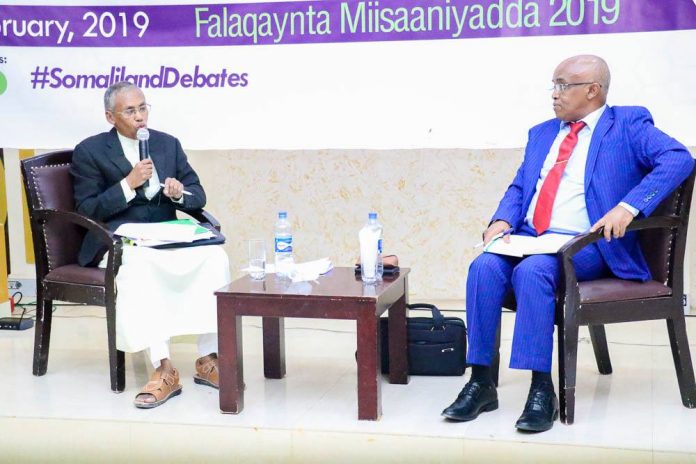 As part of Inspire Group’s #SomalilandDebates Series, we conducted a discussion on Somaliland’s 2019 Budget, with the theme “The Budget and the Public”. The main emphasis was on the 2019 National Budget priorities and whether or not it reflects the public interest.

The debate marked the first-ever similar public budget discussion held Somaliland. The event brought together diverse speakers and audience, including the Somaliland Government, Parliament’s Finance Committee, Political Parties, academics, intellectuals and members of the public to openly debate, analyse and critique the 2019 Budget. This is part of Inspire Group’s drive to enhance good governance, accountability, and transparency in Africa, and particularly in Somaliland.

The #SomalilandDebates series started in 2017 with the successful Somaliland Presidential Candidates Debate (for the first time in East Africa), it normally covers a wide range of topics including, but not limited to, governance, elections, employment, foreign policy, and economic development. This time, we focused on the Somaliland Annual Budget, with the theme “The Budget and the Public” – and for the sole purpose to educate the public on how their taxes are managed and prioritized.

The Annual Budget also known as “Miisaaniyadda Qaranka” summarised the government’s expected income and expenditure, and its economic and social priorities for that year. The Somaliland National Budget has increasingly become an area of interest for the public and other stakeholders – and rightly so. This calls for enhanced information sharing from the government side, to consult with the citizens and let them have a greater say on the budget priorities.

Although the 2019 Budget was recently approved by the Parliament, unfortunately, the public had a minimum input and knowledge on its priorities and distribution. The timelines for the budget preparation was not properly followed, and there were limited discussions at parliamentary – there was understandable urgency to pass the budget before the end of the year (2018) which inadvertently compromised the need for a greater parliamentary scrutiny. Therefore, this was a rare opportunity for the public to know more about the budget and raise any questions and concerns might had. This was also a chance for Political Parties and Intellectuals to share their assessment of the budget, and the Ministry of Finance to clarify their rationale behind the 2019 Budget allocation.

The event was a platform that created an opportunity for the Ministry of Finance to communicate with Somaliland citizens and build a relationship of trust, to enhance financial and budgetary transparency and also to ensure citizens have a fair understanding of how the national income issued. It also highlighted the government’s plans for critical social services like health, education, employment creation, and other development projects – as well as the gaps that need to be addressed.

We would like to take this opportunity to commend Somaliland’s Minister of Finance Dr. Sa’ad Ali Shire for taken the decision to face the public and political opponents and answer what might have been obviously difficult questions. The Minister has shown a goodwill gesture of transparency and accountability – and the public will remember his courage. We would also like to thank the representatives from the political parties, MPs, intellectual and the citizens that joined us for such an important event.

Inspire Group will produce a more detailed report about the debate, with key discussions points and recommendationS for the 2020 Budget.