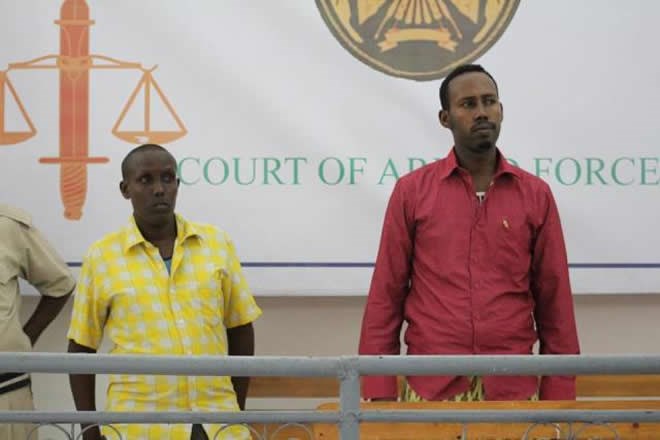 Mogadishu (HOL) – A military court in Mogadishu sentenced a soldier to death on Monday over the killing of a Somali cabinet minister the soldier is expected to face a firing squad.

The military tribunal concluding it’s hearing on Wednesday and rendered its verdict this morning.

The tragic killing of 31-year-old Abbas Abdullahi Siraji – the youngest Somali minister in the Somali history – on May 3 shocked and angered Somalis and raised new questions about the security training and “trigger-itchy” soldiers.

Siraji was shot dead at the front gates of Villa Somalia by soldiers who were escorting the Auditor General, Nur Farah. The soldiers began firing at Mr. Siraji as his car approached the checkpoint leading to the compound.

A source close to the investigation said that Nur Farah’s bodyguards were suspicious of the vehicle carrying Abbas Siraji and mistook the Minister for a suicide bomber.

The court heard that Mr. Siraji died from a bullet wound to the face.

Hassan Ali Nur Shute, the head of the military court, read the verdicts.

“Based on the evidence presented in court, including written evidence, photos from the crime scene and the police report and testimony from the defense and prosecution, the court finds Ahmed Abdullahi Abdi (Aided) guilty of murder and sentences him to death.”

Osman Salad Barre who was accused of dereliction of duty has been found not guilty by the court and ordered his release from custody.