President-elect Donald Trump’s team could move the White House press briefing room from the West Wing to another location that accommodates more media from around the country and the world, senior officials in the incoming administration said on Sunday.

Esquire magazine reported on Saturday that the Trump administration planned to relocate White House reporters from the press room to the White House Conference Center or the Old Executive Office Building next door.

Speaking on ABC’s “This Week,” incoming White House Chief of Staff Reince Priebus said on Sunday that Trump’s team discussed moving news conferences out of the small West Wing briefing room to the Old Executive Office Building, which is part of the White House complex.

Such a move would mark a potential change in access for reporters as the current briefing room is only steps from the Oval Office.

Vice President-elect Mike Pence and Priebus both said no decision had been made.

Trump has had a contentious relationship with some prominent US news organization that he refers to derisively as the “mainstream media,” banning some news outlets during the presidential campaign and publicly criticizing individual reporters.

On CBS’ “Face the Nation,” Pence did not respond directly when asked whether potentially moving reporters was a logistical move or a punitive one.

“The interest of the team is to make sure that we accommodate the broadest number of people who are interested and media from around the country and around the world,” Pence said.

Tensions with Trump escalated last week after some news organizations reported unsubstantiated allegations that suggested the president-elect could be blackmailed by Russia. At a raucous news conference last week in New York, Trump pointedly refused to take a question from a CNN reporter and called the news outlet “fake news.”

The White House Correspondents’ Association objected in a statement to “any move that would shield the president and his advisers from the scrutiny of an on-site White House press corps,” and said it would fight to keep the briefing room and access to senior administration officials open.

Jeff Mason, a Reuters White House correspondent who is president of the association, said in a statement on Sunday he met for nearly two hours with incoming White House press secretary Sean Spicer. Mason said he made it clear the association “would view it as unacceptable if the incoming administration sought to move White House reporters out of the press work space behind the press briefing room” as Trump’s team considers a larger briefing room.

“Access in the West Wing to senior administration officials, including the press secretary, is critical to transparency and to journalists’ ability to do their jobs,” Mason said.

Mason said Spicer “expressed concern that journalists adhere to a high level of decorum at press briefings and press conferences. I made clear that the WHCA would object, always, to a reporter being thrown out of a briefing or press conference.”

Priebus said: “I know that some of the folks in the press are uptight about this, and I understand.” He said the only thing that had been discussed was whether or not the initial press conferences would be held in the existing press room that he said was “very, very tiny.”

The current press room has about 49 seats.

“So no one is moving out of the White House,” Priebus said.

The White House Conference Center had been used as a temporary press room during the George W. Bush administration

The briefing room was built in 1970 by Richard Nixon over an old swimming pool installed by Franklin Roosevelt that was used regularly by John F. Kennedy but underutilized by later administrations. But the presence of reporters at the White House dates back even farther.

In addition to theater-style seats where the White House press secretary conducts daily briefings, the press area of the White House includes workspace for television, radio, print and online news organizations that cover the administration on a daily basis. 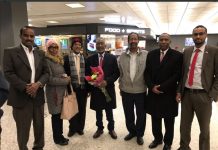 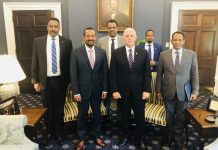