WASHINGTON — Somali farmers say al-Shabab is targeting them and stealing their livestock.

Farmers in the Jubbaland and Galmudug regions said al-Shabab militants are systematically confiscating livestock from certain clans. The group is accused of driving clans they view as hostile to their administration into poverty.

For a second week, fighting is taking place in the rural areas west of Kismayo where shepherds are trying to keep ownership of their animals. More than 20 people were killed since last week, according to regional officials and locals.

Clan elder Mohamud Shureyn, who is in Yaqbisharo, told VOA that Monday’s clashes claimed the lives of six herders. He accused al-Shabab of executing the victims, all of them men, at a water reservoir.

“The locals are no match for al-Shabab,” he said.
Mohaned Abdi Omar was an al-Shabab member until last week when he defected and handed himself over to Jubbaland regional authorities. He said he decided to abandon the group because they are targeting his clansmen.

Al-Shabab has said some of the livestock is being taken as zakat, an annual payment made on certain types of property under Islamic law.

But Omar said some of the people whose livestock was seized had already paid their zakat.

He said the group is attacking his clansmen for political reasons because al-Shabab believes that they are collaborating with the Jubbaland regional administration.
Last week, Jubbaland regional forces supporting the herders clashed with al-Shabab in an area between Berhani and Abdi Birole, west of Kismayo. At least 10 deaths were reported on both sides, according to sources in the region. In subsequent raids, herders said al-Shabab stole about 1,800 camels in a region where livestock is the primary economic pillar.

The African Union Mission in Somalia said in a Twitter message that it will work with the locals to recover the camels.

Abdirahman Sahal Yusuf, director of the Irshad Center for Religious Extremism and Terrorism, says the fact that al-Shabab is taking away livestock at a difficult time when droughts are ravaging the country is troubling.

“People who depend on livestock need leniency, they need support, this is the most important thing they have,” Yusuf said. “They need medical care for the livestock which survived the drought, they don’t need power to be used against them.” 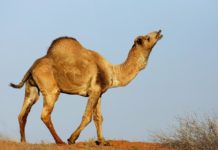