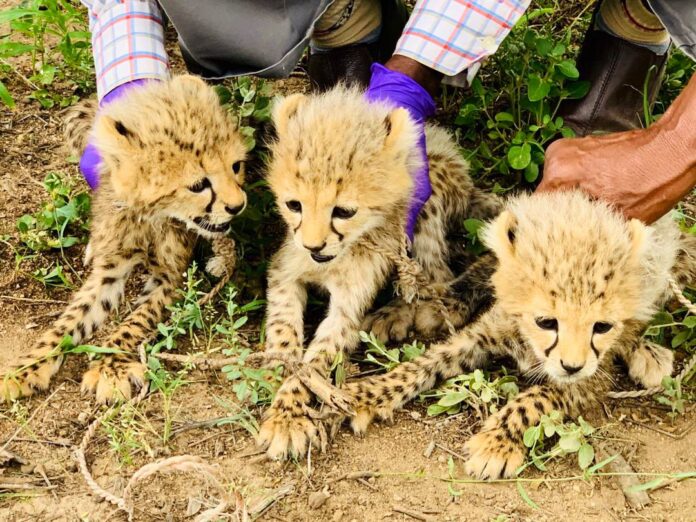 The Cheetah Conservation Fund Working with Somaliland Police, the Somaliland Ministry of Environment and Rural Development (MoERD) recently helped secure the arrest of 10 individuals suspected in two separate incidents of wildlife trafficking. On September 23, six men were taken into police custody in Hargeisa attempting to sell three young cheetah cubs to the highest bidder. Yesterday, four persons were arrested in a northern suburb of Hargeisa after being caught in possession of 10 cheetah cubs. Two of the animals were discovered with zip ties binding their front legs, and all were being transported in wooded crates familiar to Somaliland Wildlife Officers because of their use by a local smuggling ring.

“The Somaliland Police and MoERD carried out an important mission yesterday that denotes much progress in our fight against the illegal wildlife trade. We successfully confiscated 10 cheetah cubs from a known gang of traffickers. Two key suspects are in police custody, and they will be brought to justice as soon as possible. One is a notorious smuggler who has already served several years in jail for his illicit activities”, said Kayse Sudi Arale, Somaliland Police Spokesperson.

“We are pleased by the cooperation between the Somaliland Police and the Ministry of Environment during these two arrests”, said Shukri H. Ismail, Minister of Environment and Rural Development. “By intercepting 10 traffickers transiting through Somaliland in the past three weeks, arresting them and recovering 13 cubs, we have made significant progress in our fight against the illegal wildlife trade. The amount of evidence we have been able to collect in these two cases will enable us to take our investigations to the next level, and now we can begin to link up the smugglers in Africa with their overseas counterparts.”

In the prior incident, four men were caught in an undercover sting when they attempted to sell three cheetahs cubs to a local Hargeisa resident. The men were arrested by Somaliland Police and taken to jail. Hours later, unaware of the arrest, the boss of the four men contacted the resident to collect his money for the cubs. In a similar fashion, the Somaliland Police and MoERD moved in to make the arrest, and instead of money, the boss and his accomplice got a one-way ride to jail.

The cubs from the two incidents were placed in the immediate care of Cheetah Conservation Fund, MoERD’s partner in the counter cheetah-trafficking project. CCF Veterinarians and animal care staff examined the animals and found a host of health problems typically seen in cheetahs that have been in the hands of unskilled captors for more than just a few days.

All 13 are underweight and dehydrated, and most are infected with parasites. Most suffer some form of hair loss or have an exceptionally poor coat due to improper nutrition. Of the 10 that came to CCF yesterday, two had injuries to their tails, two had ulcerated noses, and one had an abscess on a hind leg. The two cubs that had their front legs bound with zip ties also had ropes around their necks, along with many of the others. The ropes are believed to have caused the minor abrasions found on their bodies. All are timid or friendly, indicating an extended period of captivity.

“Cheetahs are not pets, and they are not products to be traded or sold to the highest bidder”, said Dr Laurie Marker, Founder and Executive Director of CCF. “Cheetahs are apex predators with an important role to play in maintaining biodiversity in our ecosystems. Somaliland can be proud to have cheetahs on the landscape, and we want rural people who live with them to help protect these amazing creatures. The conflict between rural livestock farmers is also a reason cubs are removed, and some end up being trafficked. CCF’s strategy is to train rural farmers to better manage their livestock so cheetahs will not have the opportunity to prey on goats. This will make it easier to coexist with large carnivores like cheetahs. It is a better solution for everyone involved”.

Somaliland Police Spokesperson Sudi Arale also warned the public that anyone who tries to take, hold, or illegally trade wild animals will be punished to the full extent under Somaliland law.

“If we allow our wild animals to be removed from the landscape, soon we will have none left, and that will be a tragedy. The illegal trade in cheetahs must stop here and now,” added Minister Shukri Ismail.