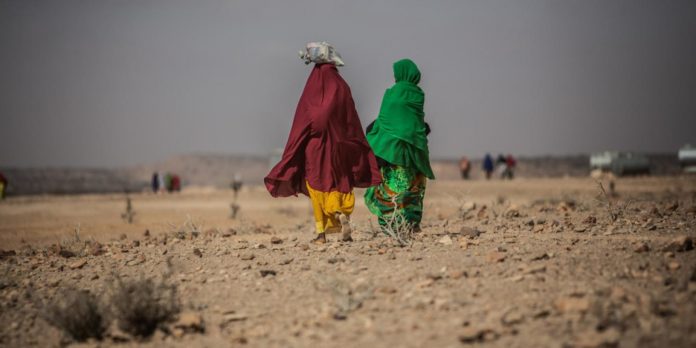 Today, Oxfam launched a report which analysis the comparison on the recent droughts that hits the horn of Africa (Somalia/land, Ethiopia, Kenya). The report is highlighting the status of funding and implication if not acted quickly.  There is also press release alongside the report which emphasises Oxfam’s standpoint of the current drought crisis in the horn.

The following statement was issued today by OXFAM.

More than 15 million people are in need of aid as drought hits parts of Ethiopia, Kenya and Somalia again. Yet lessons from the devastating droughts of 2011 and 2017 are being ignored, putting lives at risk, warned Oxfam today.

The international agency is calling on governments to support the aid effort which is currently just over a third funded, making it difficult to help all those who need it and prevent an even greater humanitarian crisis.

Consecutive poor rains have destroyed crops and the means to earn a living, and eroded people’s ability to cope leaving 7.6 million people across the three countries in severe hunger. The crisis is compounded as millions of people have been forced to flee their homes in the region due to conflict and the effects of drought.

Lessons learned from the 2011 famine, which killed over 260,000 people, helped avert a famine in 2017 with large scale, swift funding ensuring an effective humanitarian response.

Millions of people are still recovering from the 2017 drought, which left them even more vulnerable to the impact of the current drought. However, at the same stage two years ago the humanitarian response was three-quarters funded.

“We learned from the collective failures of the 2011 famine that we must respond swiftly and decisively to save lives. But the international commitment to ensure that it never happens again is turning to complacency. Once again it is the poorest and most vulnerable who are bearing the brunt.

“We cannot wait until images of malnourished people and dead animals fill our television screens. We need to act now to avert disaster.”

The serious international shortfalls contrast with a more proactive response from the governments of the three countries: the Kenyan government is leading its drought response with minimal international funding; Ethiopia is paying nearly half the bill of all humanitarian activities in the country; Somalia has also significantly improved security and humanitarian access. But each country must expand these efforts and without more international support they will not be able to avert a greater crisis.

Jama, a Somali displaced since the drought two years ago, fears an even worse outcome this time around:

“We lost all of our livestock in 2017. If there are no solutions and the situation doesn’t improve, we will lose everyone here. I’m afraid of losing people.”

“We are face-to-face with this crisis every day and scraping together all possible resources to ensure the best possible response. This means maximising direct funding to local humanitarians, embedded in communities and who are nearly always the first responders in any crisis. Without enough funds and the right kind of support, our hands are tied.”

A climate crisis spiralling out of control has made drought the new norm in the region and is a reflection of global inequalities where vulnerable communities, who have done least to create the climate crisis, face its most devastating impacts. The immediate humanitarian response must be matched with genuine commitment to addressing systemic causes of the crisis.

Oxfam and its partners are currently helping hundreds of thousands of people with life-saving support in Ethiopia, Kenya and Somalia by providing clean water and rapid flexible cash assistance, matched with longer-term support to build stronger, more resilient communities.