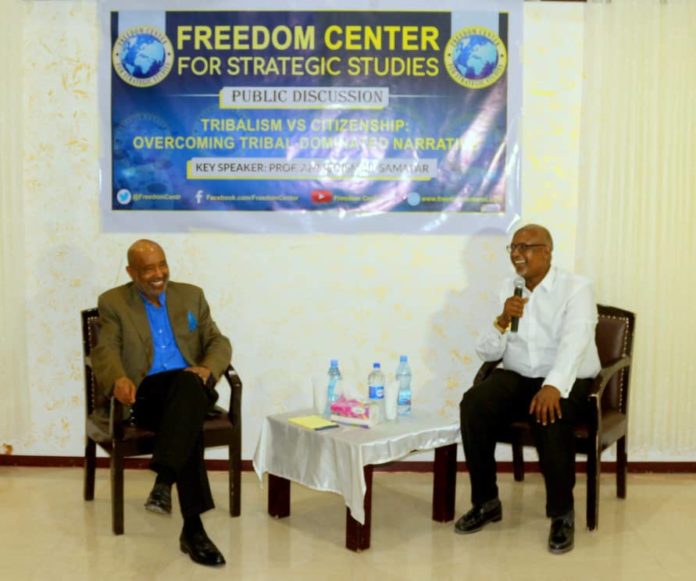 Horndiplomat-Freedom Centre for strategic organized a public discussion in Hargeisa about the  Tribalism vs Citizenship: Overcoming the tribal-dominated narrative” was to tackle and reflect the current Somaliland.

The following statement was issued today by the Freedom Centre for strategic.

The meeting was attended by different sectors in the community of Hargeisa, particularly the young university students, intellectuals and other prominent figures in Somaliland. The program entitled “Tribalism vs Citizenship: Overcoming the tribal-dominated narrative” was to tackle and reflect the current Somaliland, which is tribalism, the tribal language is the predominant narrative in the socio-political culture of our society.

During the event, it was overwhelmingly agreed that the tribalism is the only voice heard in the public spectrum, which dominates the political space. Tribalism promoted gender disparity and patriarchalism, demoted professionalism, seriously obstructed our nation’s progress and brighter future.

It has emerged that the figures known to utilize clannish practices irresistibly influenced the public, whereas the elite sector and the individuals with the progressive leadership intent are behind the scenes and doesn’t have the necessary political and economic capacity to act. of the society with the tribal whereas that the majority of the communities in the region have been successful in the practice of clan use.

Issues that we shed on light includes “how to tackle and undertake measures to promote citizenship and statesmanship” – It also included “How can we encourage the voices of intellectual community of the society in their role in this nation? “

The Center is planning to share the results of this analysis as well as the practical suggestions to the public soon.