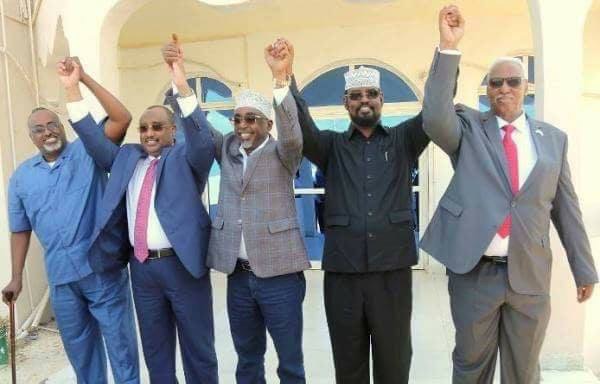 Somalia has entered a dangerous political stalemate that could unravel the significant progress made on peace-building and state-building since the end of the transition in 2012. The announcement on 8 September 2018 by the leaders of five federal member states to suspend cooperation with the Federal Government is alarming on many levels, not least because such a coordinated action by the states is unprecedented. The response – or lack of it – by the Federal Government of Somalia (FGS) on a crisis of this magnitude is a further cause for serious concern. More than ever before,it is essential that the two sides engage in serious dialogue, in order to reach viable and sustainable compromises.

The current crisis has been brewing beneath the surface for a long-time, since well before the recent Kismaayo Communiqué. Mistrust between the Federal Government and federal member states has grown steadily since the election of President Mohamed Abdullahi Mohamed ‘Farmaajo’. Amongst a range of complex factors driving the tension, the two sides have built increasingly negative perceptions of the other, making any resolution to the crisis difficult to achieve. The Federal Government believes that during the previous Hassan Sheikh Administration member states have, expanded their interpretation of the powers allocated to them under the Provisional Constitution. In particular FGS is concerned that states have acted autonomously in all policy matters, including in areas exclusively allocated to the Federal Government in the Provisional Constitution.

On the other hand, the member states suspect the Farmaajo Administration is gradually attempting to centralize powers in Mogadishu. In particular, the states claim that FGS has sought to directly interfere in their internal politics, by attempting to unseat the current leadership of the states and replace them with more pliable individuals.

Neither side is totally mistaken in their perception. Each side has used the ambiguity in the Provisional Constitution to its advantage to carve more ground for itself. Member states have systemically expanded their interpretation of the constitution to engage directly in foreign, defense and monetary policies in contravention of the Provisional Constitution. By their own admission, state leaders have traveled to foreign nations in search of financial assistance and even political and security support. For all practical purposes, states run their affairs as autonomously as Somaliland, which declared unilateral secession in 1991. Despite this fact, they insist on their membership of the federation, an assertion that lacks merit in the eyes of FGS. Mogadishu instead perceives member states as acting aggressively, only invoking federalism opportunistically to justify their expansive and unconstitutional political culture.

On the other hand, over the past 18 months, FGS has taken a more antagonistic posture against member states, and even against federalism itself.

There is plenty of evidence that demonstrates the FGS intent to transform the member states into submissive entities. For example, it is widely believed that the FGS engineered the removal of the former president of Hirshabelle, Ali Abdullahi Ossoble from power. The FGS is also suspected of having a hand in the deepening rift among Galmudug politicians, which has crippled and divided the state since 2017 when the first attempt to remove President Ahmed Haaf failed. The episode has damaged the unity of the state government irreparably. In Jubbaland, the FGS has also been accused of interference in the state in multiple ways. This includes accusations that it has stoked discontent in Gedo region, and appointed security chiefs and other officials without consulting with the state’s leadership, in contrast to what was agreed within the framework of the National Security Architecture. In Puntland, the FGS stands accused of empowering the Vice President to openly defy President Abdiweli Gaas.

These actions, actual or perceived, by the FGS have elicited increasing anxiety among leaders of the member states who are already vulnerable because of local elections planned for later this year and next year. To counteract what they see as open hostility from the FGS, the leaders of the member states have taken the extraordinary step of forming the Council of Interstate Cooperation (CIC). Since its formation late last year, the CIC has not only become a support group among the states, but it has also transformed into a high-level political platform designed to collectively co-ordinate action vis-à-vis the FGS. The tenor of the CIC communiqués has become increasingly hostile to the FGS, surfacing a deep resentment against what they view as an anti-federalist administration in Mogadishu.

This stalemate has left the country and its people at the mercy of two increasingly distrustful forces entangled in a political tug of war of unprecedented gamesmanship. Fundamentally it’s the people of the country who are paying the ultimate price of continued political instability.

The federal member states have repeatedly accused the Farmaajo administration of taking an aggressive stance towards their administrations, creating, according to the regions, greater instability throughout the country.

For some this evokes the negative memories of the first year of President Hassan Sheikh’s administration. In 2013, the then newly elected President Hassan Sheikh spent significant political capital trying to undermine the establishment of the nascent Jubbaland State, on the grounds that it was constituted illegitimately and backed by a foreign actor. While the FGS had legitimate concerns relating to the inclusivity of the administration and the formation process, the manner in which it sought to influence the process proved counter-productive. By late 2013, the FGS was forced to negotiate a peace agreement with Jubbaland in Addis Ababa under the patronage of Ethiopia. Not only did the Hassan Sheikh Administration lose the battle over the formation of Jubbaland State, but it also failed to keep external actors out of the peace process. In the final agreement Jubbaland was able to secure many of its key objectives, whilst the FGS had to cede considerable ground, ultimately emerging from the negotiations in a weakened position.

After the failure of their efforts in Jubbaland, Hassan Sheikh and his administration turned to a far more pragmatic, consultative and effective approach to state formation, focusing on co-governance in a manner that reflected the spirit of the constitution. In the subsequent years, that Administration was credited with the establishment of Southwest, Galmudug and Hirshabeelle states, despite what at times appeared to be insurmountable challenges. Crucially, Hassan Sheikh is also credited with the establishment of the National Leaders Forum (NLF), which, though imperfect as it usurped some of the responsibilities of the cabinet and parliament, constituted an important platform for dialogue and consensus-building between the FGS and member states The NLF served as a political platform for member states to discreetly influence national-level decision-making, as well as a reliable forum for co-governance and confidence building.

This pragmatic approach is missing from the actions of the FGS today. The FGS appears intent on subduing and subordinating member states (and all other rival political forces), despite the fact that this is not an achievable goal, and is provoking increasing resistance and instability. Member states are now even turning to external actors for leverage against Mogadishu. The fate of Ali Ossoble in Hirshabelle has led other leaders to take a defensive stance against possible ambitions of FGS.

Vision: To advance peace, the rule of law, and a culture of learning in Somalia

Mission: To inform public policy by providing independent empirical research and analyses, and creating an enabling environment for inclusive dialogue