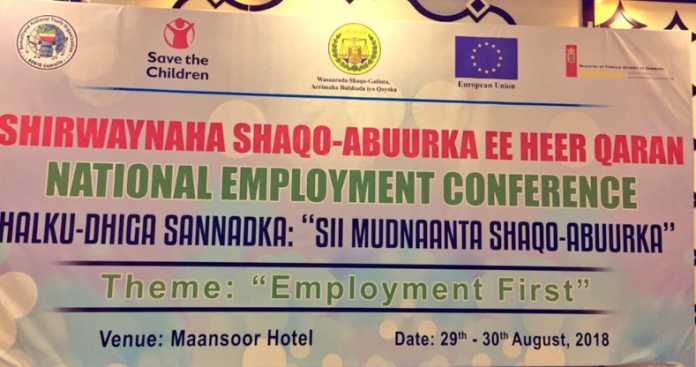 The conference was organized jointly by SONYO Umbrella, the Ministry of Labor and Social Affairs, Save the Children, DANIDA and the European Union. The conference was attended by more than 300 people from the various sectors of the community, regions, international organizations, the United Nations and other dignitaries.

In his opening speech, The president thanked the organizers and also promised the Somaliland nationals to take first priority of employment in the country.

” I Would like to thank the organizers of this conference, Any job that a Somaliland nationals can do, should not be employed for foreigners,” said Somaliland’s President Muse Behi Abdi, who was speaking at Employment conference.

“We look for ways to create jobs. Transparency is the cornerstone principle for the government. The government is dedicated to making bring down the corruption and make people trust the government.”

Somaliland Minister of Labor and Social Affairs Hindu Jama Gani speaking at the employment conference has Underlined on the finalization of the national employment policy.

Other International partners reiterated to support the implementation of the outcome of the national employment conference.

“Save the Children Supported 732 youths to be employed. 77% of the students were employed that we trained on skills that enable them to work” Said by Mohamed Egeh Save the children officer

“Recently, I visited Burao, I met active and energetic youth that believe the future of Somaliland relies on them and that they can contribute to their country. Therefore, it is our responsibility to support them” Anne E. Kobæk Head of Office, Danida Programme Office

“There are opportunities available for Somaliland including Berbera port investment and also Berbera corridor that European Union is part of its finances.” Said by Alberto from European Union Field Officer

Finally, Somaliland President, Danida, Save the Children, Chamber of Commerce and Sonsaf, hereby pledge to work together to achieve the goals set out for both the Somaliland National Youth Employment Strategy and Employment Accord.

The Somaliland Youths estimated about 70%, makes the largest population (roughly two-thirds) in Somaliland and yet surrounded by so many challenges such as high rates of illiteracy, limited access to formal education and technical skills, poverty, unemployment leading to dependency on external sources such as remittances, lack of youth-friendly centers; effects of conflict and gender-based violence; and alienation from positive interactions with adults and the rest of society. And these problems worsen the youth-related issues being a cross-cutting in nature, the lack of coordination of intervention efforts, inadequate youth investment and uneven youth-related resource distributions existing in the region either been from the public or other key international youth stakeholders.