Brazilian legend Ronaldinho is returning to former club Barcelona to take up a role as an ambassador.

Ronaldinho, who enjoyed five supremely successful seasons at the Nou Camp between 2003 and 2008, will act as a non-playing recruitment as Barcelona re-sign one of the club’s most famous ex players.

The ball juggling former Ballon d’Or winner, who is yet to officially retire from the sport, will play a key role in Barcelona’s plans to expand international growth as the club prepares to open an office in New York, USA.

The 36-year-old, who was twice named Fifa Player of the Year during his time in Spain, left the club to join AC Milan to make way for Lionel Messi who was building his reputation alongside Ronaldinho in the Barcelona midfield.

Ronaldinho won La Liga twice and claimed the only Champions League triumph of his career when his team defeated Arsenal 2-1 in the 2005-06 final. 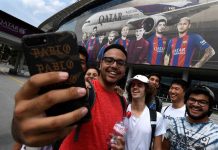