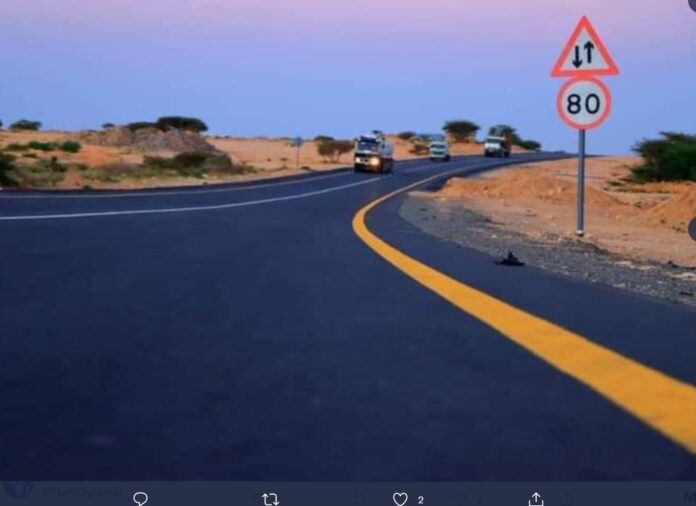 85 per cent of the construction of the cross-boundary road project which links Somaliland’s port city of Berbera with Ethiopia’s border town of Togochale has been completed.

The road is expected to make Somaliland an emerging competitor, along with Djibouti and Kenya, in attracting Ethiopian importers and exporters. The completion of the road is also expected to boost the trade volume between Ethiopia and Somaliland by 30 percent.

The 234 kilometer highway road project, which consists of three phases, is planned to be completed by the end of 2022.

The Berbera – Hargeisa road is scheduled to be completed by April 2022, the road from Kalabaydh – Wuchale by July 2022 and the Hargeisa bypass will be completed in July 2022.

The USD 400 million project kicked off in 2019 with funds from the United Arab Emirates (UAE) and the United Kingdom (UK).

This is the first phase of Berbera Corridor, when the road is finished it means that Port can serve as a gateway to regional trade in East Africa.
Last year,#Somaliland,#UAE & #Ethiopia have launched this road project that will link Ethiopia’s border town Wajale to Berbera Port. pic.twitter.com/jgUz5KI0ET

“Our intention is to increase Ethiopia’s use of Berbera port not only by developing the port and the corridor but also by incorporating Ethiopia in the operation of the port,” Mohamed Ahmed Mohamoud, the newly appointed Ambassador of Somaliland to Ethiopia told The Reporter.

According to the agreement between Ethiopia, Somaliland and DP World, Ethiopia owns 19 percent of shares in Berbera port, which will be managed and developed by DP on a concession of 30 years. DP will take the ownership share of 51 percent and Somaliland will own 30 percent of the shares.

“Somaliland is trying to strengthen the relationship of the two countries by offering a port to Ethiopia with world class infrastructure. Ethiopia is our main gate to the world; it also needs more than one port to access,” stressed Mohamed.

Currently, Ethiopia utilizes Djibouti port for over 90 percent of its international trade. Apart from modernizing its domestic logistics sector, Ethiopia is diversifying its access to port to reduce the pressure on the Djibouti route.

“Depending on what kind of agreements we reach, Ethiopia can use our other ports when we develop them. If we have a good agreement, we can become the logistics hub for the region,” he added.