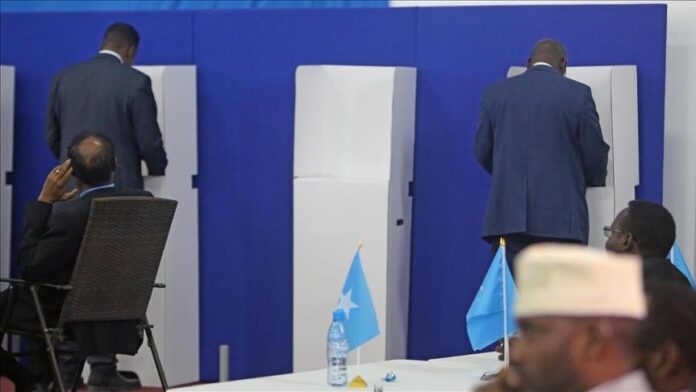 The intermittent and amorphous election in Somalia dumfounds everyone, at least the public, the rank-and-file politicians and the international community as well. The mandate of the incumbent president has ended nine months ago, and yet, the presidential election is far from anticipation. Some of the talking-heads believe that the president is enjoying innocuously and in a subterranean manner the two-year extension that the parliament has rejected in May this year. Despite the ephemeral political rhetoric emanating from the opposition, the public is pussyfooting and the international community is dithering to pressure the government for conducting fair and square elections in a timely fashion.

Instead of expediting the election process and meeting the free and fair election standard, the incumbent has engaged in leveraging, manipulating, meddling and manoeuvring the process. The Upper-House election was one of the sordid selections that the sitting government has involved and utilized immensely, especially the susceptible states including Galmudug, Southwest, and Somaliland seats. Presidents of Qoor-Qoor, Laftagareen, and the deputy prime minister Mahdi as viceroys of Farmajo became the movers and shakers of the election so far. The Upper-House election in the Hirshabelle state of Somalia was relatively balanced. Because, President Ali Guudlaawe has managed wisely, and some seats were taken by the opposition including Muse Suudi, who is the biggest pet-peeve of the current administration in the villa-Somalia.

Meanwhile, the blame of the election rigging is not only exclusive to the federal government but also the restive and the political bigwig states of Puntland and Jubbaland. For instance, the incumbent president of Puntland state, his Excellence Deni who his candidature for president of Somalia is yet latent and to be exposed soon has influenced the elected/selected eleven senators in Puntland. More or less done by president Ahmed Madobe. In this regard, election rigging and manoeuvring became rampant and ubiquitous this term in Somalia.

The dichotomy and lack of common agenda post-Farmajo is the biggest fiasco among the dissenting voices. The fragility among the opposition gives competitive advantages to the incumbent president his Excellency Mohamed Abdullahi, aka Farmajo. The opposition should denounce and boycott anyone who is derailing, deceiving and delaying the election for posterity’s sake. The national interest must be ironclad and steadfast regardless. Both the leaders of the federal government and the regional states are responsible for any wrongdoing during the election and the repercussions afterwards. More specifically, the political novice prime minister, Mr Roble, and the pliant chairman of the Federal Election Implementation Team (FEIT), Mr Cirro will be questioned about the irregularities in the election process.

One of the dubious elections in Somalia was in 1967 where plenty of briefcase political parties participated and vanished right after the results were tabulated. This election has resulted in irredeemable damage, the killing of the late president his Excellency Abdirashid Ali Sharmarke. After two years, in 1969, Somalis have witnessed the first and the last coup in the country.

If we really immerse and ponder over the haphazard and irregularities in the current election process, we can predict how post-election violence is imminent.

If we take as an example Ethiopia, the embattled prime minister in Ethiopia who is also a close friend of Somalia’s president Farmajo, when he has postponed the national election which was supposed to take place in September last year, the result became confrontation, clashes, public uproar and international excoriation against Abiy’s government. Though the context and the dynamics of the two countries are more or less different, but both leaders’ mentality of extending their mandate by hook or by crook is cut from the same cloth. Farmajo and his tin-pot partner Abiy share colossal of similarities including power greedy, lip service, a sense of dictatorship, and the most importantly employing bootlickers and dislodging perspicacious ones.

As a caveat, the incumbent government, and the indirect and incompetent electoral commissions should refrain from corrupting and mismanaging the election, if not, post-election violence is unfolding. I wonder if they can hear and heed me.