More than 100 trucks of food aid have arrived in Ethiopia’s northern Tigray region after weeks of the blockade, the World Food Programme (WFP) has said.

It has had difficulty getting the aid through to the region.

Tigray has been destabilised by a 10-month conflict after regional forces clashed with the federal government forces.

The WFP tweeted a video of the aid convoy arriving in Tigray’s capital Mekelle;

The Ethiopian government has in the past denied blocking aid routes.

The US government’s humanitarian agency said Tigrayan forces had looted its warehouse in neighbouring region Amhara. 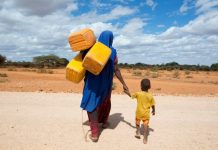 UN agencies warn millions are at risk of famine in Somalia