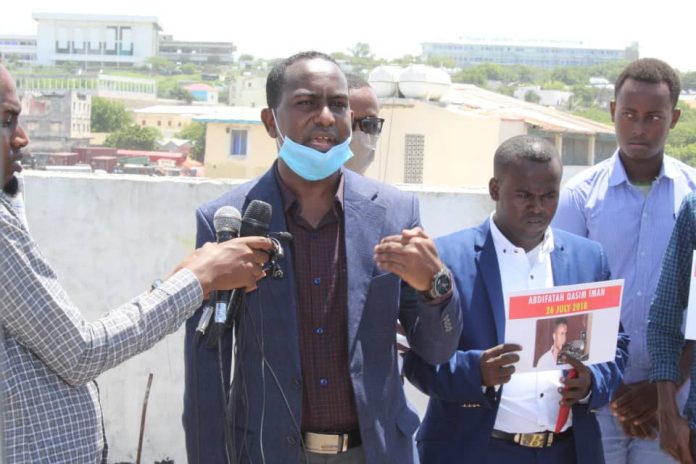 MOGADISHU, Somalia, 20 May 2020 – Somali Journalists Syndicate (SJS) welcomes the statement on Tuesday 19 May, by Maria Arena, Chair of the European Parliament’s Subcommittee on Human Rights, on the continuous attacks on journalists and restrictions on media freedom in Somalia.

Journalists in Somalia who are indeed on the frontline in the fight against Covid-19 are now between hard and a rock place. This year alone two journalists (Abdiwali Ali Hassan and Said Yusuf Ali) were murdered and 26 others either physically assaulted or blocked by authorities in different places across the country since the beginning of 2020.

SJS welcomes the call by Chair of the European Parliament’s Subcommittee on Human Rights to the Federal Government of Somalia to carry out a prompt, impartial, independent and thorough investigation into the killings of the journalists and to bring those responsible to justice. We also welcome the EU’s tribute to Somali journalists who risk their lives in the fight to freely exercise their profession and defend media freedom in this specifically difficult time of Covid-19.

“The Statement by Maria Arena, the Chair of the European Parliament’s Subcommittee on Human Rights to highlight the risks faced by Somali journalists and to call for Somali authorities to investigate killings against journalists brings a grim of hope to the brave journalists who continuously risk their lives only to inform the public,” Abdalle Ahmed Mumin, the Secretary-General of Somali Journalists Syndicate (SJS) said “We call for the authorities in Mogadishu and Hargeisa to immediately free imprisoned journalists Mohamed Abduwahaab (Abuuja), the editor of Radio Hiigsi who is held incommunicado since March 7 in Mogadishu and Abdimalik Muse Oldon, a freelancer jailed since 17 April, 2019 in Hargeisa.”

In Mogadishu, earlier this week, Somali journalists and representatives from the media community protested against the continued violations including threats, harassment and intimidations by state officials against journalists and media houses in a time when the country is heading to national elections. (END)