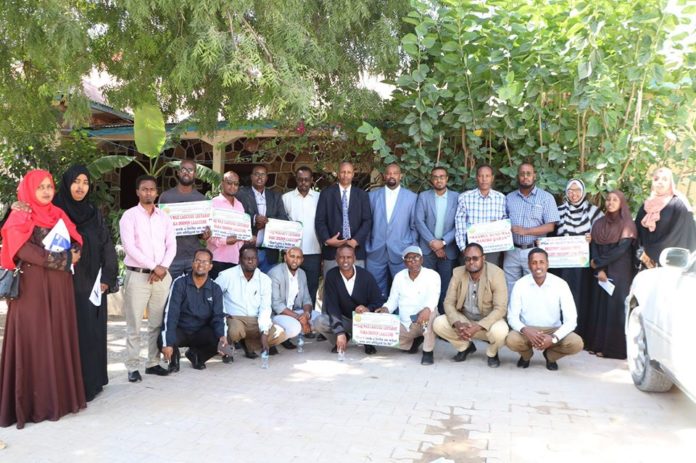 The Governance and Anti-Corruption Commission (GGACC) team of experts completed a good governance and awareness training for the government parastatals in Hargeisa which started December 15th and completed December, 30th, 2019.  The training came after GGACC had conducted assessment actions for Somaliland independent agencies in January, 2019.

The Good Governance and Awareness training was intended to assist the government staff and the leadership of Somaliland National Printing Agent, the National Tender Board, the National Disaster Preparedness and Food Reserve Authority (NADFORD),  the Somaliland National Aids Commission (SOLNAC) in strengthening accountability and transparency in their activities. The missions provided peer advice on implementing their works on the basis of the ruling party political platform and the Somaliland national Development Plan 2.

The scope of the two-weeks training service mission included by the discussions of staff and senior management of the agencies on how the good governance principles would be enforced in their agencies as well as increasing the coordination and cooperation among the government agencies. During the missions, GGACC team observed the level of administration in each agency based on their establishment acts and laws and the need to equip each agency in the adaptation of the good governance principles. The team offered recommendations and suggestions to support the leadership of the government agencies to further enhance and sustain a good working relationship among them.

The agencies have been advised to come up with strategic plans because the plans will instigate the each government agency to reach good practices based on the outlined principles of good government. The team was led by Mr. Liban Ismail Abdilahi, the Deputy Chairman of the commission with inclusion of three other experts from   the GGACC, namely, Mr. Muse Abdilahi Muhumed, the Director of Public awareness, Khadra Yusuf Guleid, the commission’s Good governance Director and the advisor of the commission, Mr. Abdurrahman Esse Nur.

The training events were held at headquarters of each agency in Hargeisa and participated by all employees and their leadership of above stated agencies.   As a part of the event, each session of the trainings were designed for two days in each agency starting from the morning until the noon.

The training modules were included by the principles of the good governance, the Anti-Corruption issues and large part of awareness materials distributed to agencies to use for the prevention of mismanagement and corruption. The event was closed by deputy chairman of Somaliland National Good Governance Commission on the 30th of December, 2019 in Hargeisa.