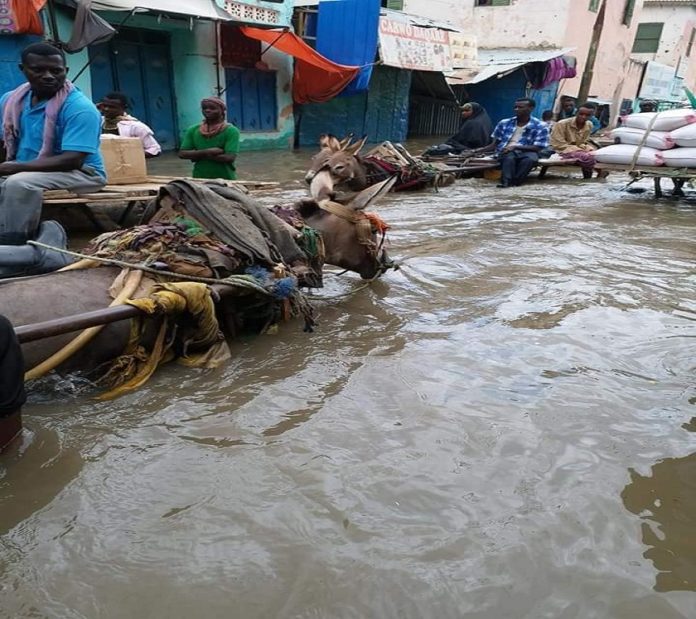 “FAO is committing its best efforts to stand by the affected communities in Somalia during this post-emergency recovery, so to restore agricultural activities as soon as possible, while preserving livelihoods and building resilience for the future,” says Etienne Peterschmitt, FAO Representative in Somalia a.i.

“We are planning to assist 5 000 families affected by floods with unconditional cash transfers and agricultural inputs that enable farmers in Hiiran and Middle Shabelle to swiftly resume crop production. Our aim is to address these time-critical needs throughout this post-emergency window, in particular in rural areas,” says Ezana Kassa, FAO’s Emergencies Coordinator in Somalia.

FAO will provide each household with 20kg of maize seeds or 15kg of sorghum seeds and 10kg cowpea seeds, as well as 0.24 kg of assorted vegetables.

Repairing dykes and canals: towards a resilient recovery

In collaboration with the State and Federal ministries, FAO will continue with his works planned before the floods. Funded by Italy, works will reinforce up to 10 km of river embankments to protect Belet Weyne town, as well as rehabilitating up to 36 km of irrigation canals in Jowhar, where up to 75 km of main canals will be recovered to provide irrigation and drainage to smallholder farmers, while diverting flood waters through a long-term development project funded by Sweden and Italy in Middle Shabelle region.
FAO’s response is also reaching the most affected urban areas. “Thanks to the United Kingdom funding, we are restoring roads in critical areas for livelihoods in Belet Weyne town. This includes the main market area and roads leading to the market. This means providing and compacting approximately 14,000m3 of soil,” says Andrew Lanyon, FAO’s Resilience and Social Protection Coordinator in Somalia, speaking of the epicenter of the disaster where 273,000 people have been forced to flee their homes.

FAO will also reinforce its efforts to produce early warning information that facilitates preparedness for shocks. Somalia Land and Water Information Management unit, commonly known as SWALIM, has been monitoring rainfall, river levels and flood extent on a daily basis to produce reliable and consistent early warning information, which is disseminated through twitter and, most importantly, through the countrywide available FRRIMS (Flood Risk and Response Information Management System) sms alert system.

“SWALIM’s maps showing the flood extent in Belet Weyne town and along the Shabelle river, as well as cropland affected by floods, have been key elements to orient the humanitarian response by the international community in Somalia,” explains Ugo Leonardi, SWALIM’s Chief Technical Adviser a.i.

SWALIM will continue its capacity development work with government officials at both Federal and State level, through various trainings such as for water and land resources mapping by using GIS/RS tool or international fellowships to Ministry staff on meteorological observation.