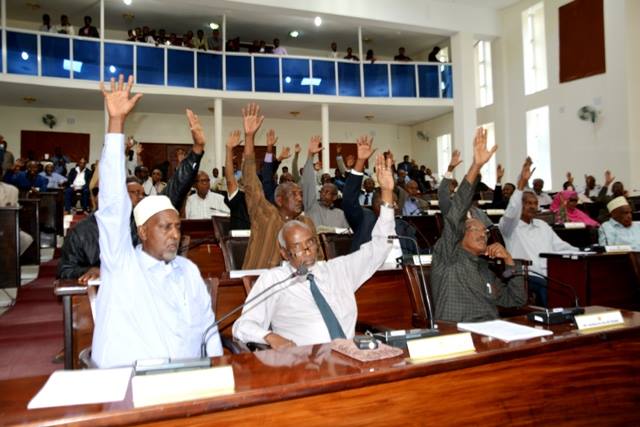 Horndiplomat-Somaliland House of Representatives approved six nominees out of the seven members of the National Electoral Commission. Waddani opposition party has withdrawn the one member it nominated.

Meanwhile, In a joint statement, the opposition parties of Somaliland UCID and Waddani rejected the approval of 6 new members of NEC, accused the President of killing democracy and called on “consultative conference to discuss the situation of the country. The future of Somaliland is falling over a cliff” According to Somalilanddaily

Earlier last month Somaliland Opposition parties (UCID and Waddani) has withdrawn their members that they selected to represent at upcoming Electoral commission. The two Parties have shown concern about the two nominated by president Muse Bihi and accused one of them is active member ruling party which is against the Election law.

On July 28, Somaliland political parties reached a landmark accord that brings the year-long differences among the parties to an end. Under the EU and UK mediation, the government and Political parties of Somaliland ratified the accord at the presidential palace.

There's a heavy political confrontation in #Hargeisa over the new electoral commission members.

-President Bihi turned down to replace the two members from his side which is the root cause of the current argument.

Despite conducting multiple presidential polls, the parliamentary elections are long overdue. The first and only election of Somaliland’s House of Representatives was in 2005. Since then, at least five delays have pushed back the process.