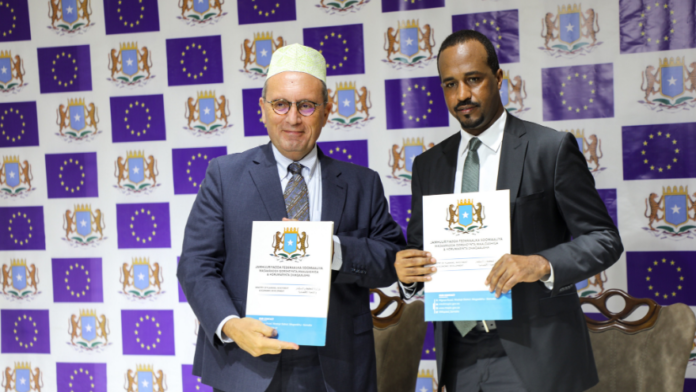 Eng. Yarisow Programme will target coastal cities of Mogadishu and Berbera. InMogadishu the project will support the rehabilitation of approximately 17 km of roads with street lights and rainwater drainage, focussing primarily on community roads, while in Berbera the project will contribute to urban development by strengthening the capacity of the municipality in terms of urban planning, improving the waste management system as well as stimulating youth employment and entrepreneurship.

During the signing ceremony, European Commission Director-General paid homage to the late Mayor of Mogadishu and Governor of Benadir Regional Administration, Engineer Abdirahman Osman Omar and said, “My hope is that this initiative will help make Mayor Yarisow’s dream of peace and development for all Somalis, and Mogadishu regaining its fame as the Pearl of the Indian Ocean, come true.’’

Somalia Prime Minister Hassan Ali Khaire commended the work of the European Union delegation to Somalia and underlined that Eng. Yarisow Programme’s focus on the rehabilitation of the city correlates with The Federal Government of Somalia’s priority to ensure the late Mayor Yarisow’s vision for Mogadishu is achieved.

The Eng. Yarisow Programme is part of the Regional Indicative Programme (RIP) 2014-2020 for Eastern & Southern Africa and the Indian Ocean. For Mogadishu project EUR 15 million contribution to the World Bank managed Multi-Partner Trust Fund and the second phase of the Somalia Urban Resilience Programme (SURP). The remaining EUR 7.5 million contribution for Berbera project will be implemented by UN Habitat.