Kenya has recalled its ambassador in Mogadishu and ordered Somali envoy out of the country over alleged auctioning of oil and gas blocks in Kenya’s maritime territorial area that borders Somalia.

Lieutenant-General (Rtd) Lucas Tumbo was summoned back to Nairobi for urgent consultations.

“This unparalleled affront and illegal grab at the resources of Kenya will not go unanswered and is tantamount to an act of aggression against the people of Kenya and their resources.

“This outrageous and provocative auction deserves and will be met with a unanimous and resounding rejection by all Kenyans as well as all people of goodwill who believe in the maintenance of international law and order and the peaceful and legal resolution of disputes,” the PS Kamau said.

Kenya’s sea boundary dispute with Somalia has been simmering for years. In 2014, Somalia sued Kenya at the International Court of Justice asking for a proper determination of the sea border between the two countries. The case is still pending. ICJ judges allowed the case to go to full hearing despite Kenya opposition. Nairobi wanted alternative dispute resolution.

“By carelessly ignoring the internationally acceptable norms of boundary dispute resolution and or political and diplomatic disagreements, the Government of the Federal Republic of Somalia has once again demonstrated that it has yet to attain and embrace the political maturity and diplomatic stance of a normal, well adjusted, and properly functioning modern government,” PS Kamau said.

The area in contest is about 100,000 square kilometres, forming a triangle east of the Kenyan coast.

Somalia, which lies to the north of Kenya, wants the maritime border to continue along the line of the land border, to the southeast.

Kenya however wants the sea border to go in a straight line east, giving it more sea territory.

In 2009, Kenya and Somalia had reached an MoU and deposited it at the UN. It proclaimed that the sea border should run eastwards.

Here is the full statement by Kenya recalling its Ambassador to Somalia, Lucas Tumbo, in protest of the February 7 London Somalia oil conference. 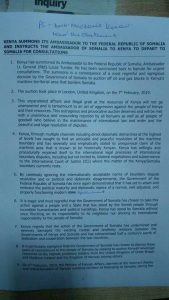 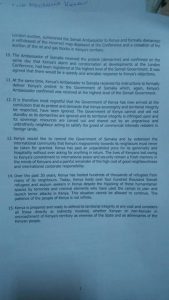