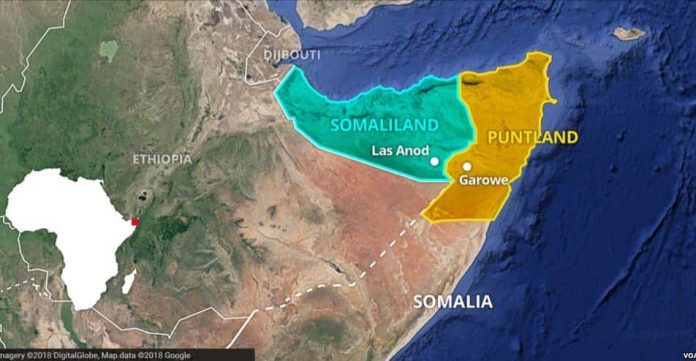 Now days, violent conflict causing human sufferings, destruction of properties and mass displacement occurring globally, as well is becoming normal and taken as simple security issue. Indeed, as some say conflict in Africa has been there for a long time due to lack of a strong leadership and lack clear border demarcations. However, the causes are not limited to intrastate but go beyond back to the colonial legacy. Since the cessation of the Cold War Era, however, the tide of conflict has shifted towards Africa. Western-states-sponsored coup d’états, civil wars, genocides, religious conflicts, and interstate conflicts have become routine.

Since mid-2002, Somaliland and Putland state of Somalia have been engaged on a border dispute in which both sides contest over the position of their border. The Putland-Somaliland dispute is territorial dispute regions of Sool, Sanaag and Ayn ( Khaatumo- SSC) between the self-declared state of Somaliland and Putland state of Somalia. The territory was historically part of British Somaliland, a British protectorate that declared independence in 1960 and then formed a union with neighboring Italian colony Trust Territory of Somaliland to form the Somali Republic (Somalia). When Somali Civil War broke out, a successor state of the British protectorate was formed in 1991 under the name Somaliland, declaring independence from Somalia.

The dispute started in 1998, when Puntland was formed as an autonomous state of Somalia and declared the region as part of its territory based on tribal affiliation of the locals.

Puntland claims Sool, Sanaag and Ayn (Khatumo-SSC) based on kinship ties with the regions dominant Darod clans.  Somaliland claims the territory as part of the original bounds of the former British Somaliland protectorate, which the self-declared country regards itself as the successor to.

Fighting between two forces caused loss of thousands of lives, and the painful displacement of countless communities and captured prisoners , humanitarian crises, a great deal of diplomatic pressure has been rightly put on both Puntland and Somaliland to resolve the issue. . Furthermore whenever there is conflict between the two forces they accused each other.

The skirmish comes amid mediation effort by former UN’S envoy for Somalia, Michael Keating who met both the administration on a mission to de-escalate the tension in Tukaraq. But unfortunately failed to de-escalate the conflict and effort did not succeeded.

Until now Jan, 2019, an increase in military tensions between Somaliland and Puntland, is being witnessed since 2018 started. According to a Crisis Group report, the two administrations are massing troops in the Sool and Sanag region, which both claim as their own.

Somaliland is a de facto independent state since 1991, when it broke away from Somalia. It has not been formally recognized by any country. However, it maintains diplomatic relations with countries such as Ethiopia, Djibouti, KSA and UAE.

In contrast, Puntland. It rejects Somaliland independence, and argues that the Sool and Sanag lands under dispute should be included within Puntland borders, based on clan and geographical criteria.

In conclusion, the current conflict does not show de-escalation or changes in improvement. There is continues conflict between Somaliland military and Putland state of Somalia Military. If it’s not well addressed, de-escalate the conflict and step back, dial down their rhetoric; the conflict will be protracted conflict.

Candidate M.A in peace and conflict studies in Mekkele University