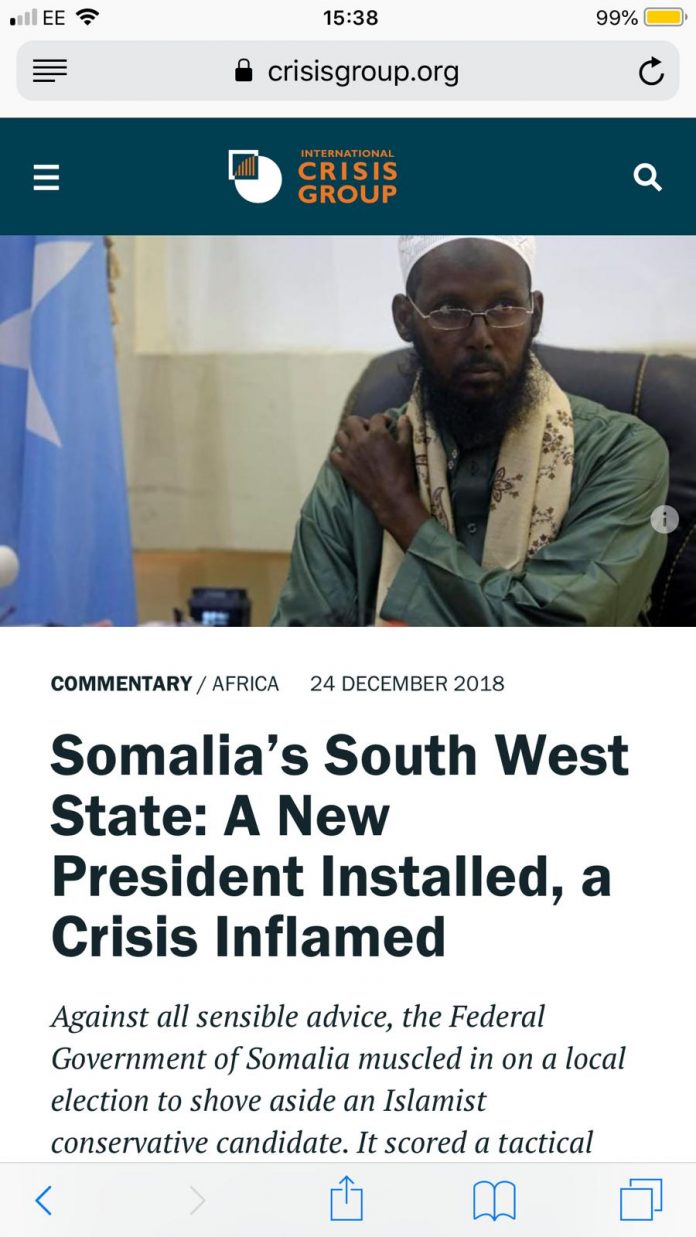 International Crisis Group commentary on the outcome of Southwest State election unfairly portrays a Somali social group as being “susceptible to recruitment into the insurgency”, argues Liban Ahmad

Rashid’s commentary takes  the Federal Government of Somalia to task for authorising the arrest of Mukhar Robow, who defected  from Al-shabaab in 2017. The decision to arrest Robow, according to Rashid, risks “alienating a huge clan constituency: both men belong to the Rahanweyn, one of Somalia’s four main clans, but Robow comes from the biggest and most influential sub-clan.”

The contrast Rashid draws between the two subclans to which Robow and Laftagareen belong is not only divisive but it also constitutes a prelude the conclusion of the commentary:  “It very well may have embittered another young generation of Rahanweyn who are susceptible to recruitment into the insurgency.”

Since there is no a Somali clan that is  more prone to radicalisation than  other clans,   one wonders why Dr Rashid took liberties with impartiality  when discussing Somali politics in the context of  militant political Islam championed by Al-shabaab.

Mukhar Robow was a senior Al-shabaab leader. There are moral questions that have a bearing on Somali politics.  To what extent does the pragmatic tendencies with which Rashid associates Robow blur the line between violence based on non-religious goals and one based on creed? In Somali culture the phrase dani waa seeto (act within constraints to achieve goals) corresponds to pragmatism. ‘Seeto’ is a rope Somali nomads use to truss up a camel.

The accusation the Federal Government of Somalia did level against Robow pertains to the fact that Robow has not denounced the ideology he openly subscribed to before defection. In this context pragmatism could mean biding one’s time to revert to the militancy

Rashid argues “Salafism is not a fringe tendency in Somalia. It is mainstream“. Ala Sheikh, Dam al-Jaddid and Al-I’tisam  drive the Salafist  agenda and power struggle “and  almost certainly will be even more influential after the transition to multiparty polls planned for 2021” writes Rashid.  Former Presidents Sharif Sheikh Ahmed and Hassan Sheikh Mohamud represent Ala Sheikh and Dam al-Jaddid respectively. Widely influential in Puntland, Al-I’tisam does not have a power-base similar to the one enjoyed by Ala Sheikh and Dam al-Jaddid cliques.

Those three groups do not have organisational capabilities and the commitment to religious militancy that made Al-shabaab the most powerful militant group in Somalia. In Understanding Somalia Conflagration Professor Afyare Elmi writes: “the overwhelming majority of Islamists are from”   the major Somali social group that claims Mogadishu, the birthplace of Union of Islamic Courts, to be their hometown.  There is no a conclusive evidence indicating a link between clan-based identity and commitment to militant political Islam in Somalia.