Why Ethiopian troops are in Somalia - Horn Diplomat 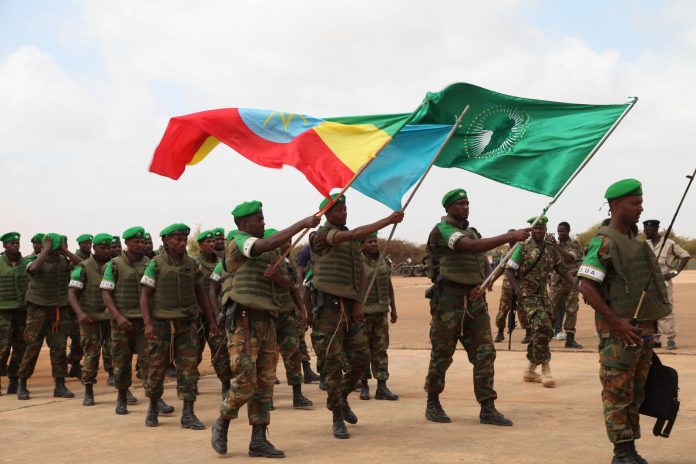 The Somali Federal Parliament would do well to discuss why the previous government of President Hassan Sheikh Mohamud rescinded the TFG-ARS agreement, argues Liban Ahmad

Many Somalis are asking questions about the role of Ethiopian troops in the arrest of Mukhtar Robow in Baydhaba. Were they enforcing the decision of the Federal Government of Somalia that disqualified Robow from candidacy for Southwest State presidency? Amisom distanced itself from the arrest of Robow.

Ethiopian forces withdrew from Somalia as a part of 2008 agreement between the former Transitional Federal Government (TFG)  and the former Alliance for the Reliberation of Somalia(ARS). Founded in Asmara, ARS agreed to the peace deal on the condition that Ethiopian troops should withdraw from Somalia after the signing of  the agreement.

The ‘withdrawal’ article in the agreement meant the TFG will have to find a force capable of protecting cities and towns from which Ethiopian forces had withdrawn. The signing of TFG-ARS agreement predeicated on the reasoning that TFG will not fight Muqaawama ( resistance forces). This expectation hit a snag.

Withdrawal of Ethiopian troops from Mogadishu gave Al-shabaab an opportunity to capture many districts of the capital,  where its operatives carried out suicide bombings at meetings and graduation ceremonies. Al-shabaab was controlling administrative capitals of Lower Shabelle, Middle Shabelle, Bay, Bakol, Middle Jubba and Lower Jubba, and Hiiraan.

The TFG-ARS agreement gave Al-shabaab a new lease of life. It changed its name into Harakat al-Shabaab al-Mujahideen. Many people surmised that Robow would join the newly elected President of at TFG, Sharif Sheikh Ahmed, to form a new government. Robow emerged as a senior Al-shabaab leader under the late leader of the group, Sheikh Godane.  When Somalia ended the transitional period to have a permanent government, President Hassan Sheikh Mohamud rescinded the 2008 ARS-TFG agreement to allow for the deployment of Ethiopian troops. According to VOA Somali Service journalist Haruf Maruf, Ethiopian Defence Forces are in Somalia on the basis of an agreement between Somalia and Ethiopia.

Unlike MPs of the current Somali Federal Parliament who have accused President Mohamed Abdullahi Mohamed of signing a secret agreement with Ethiopia, no MP of the last Parliament had questioned the government decision to authorise deployment of Ethiopia in violation of the 2008 peace agreement. It is a permanent government, the reasoning went, and it can enter an agreement with a sovereign state.

This agreement facilitated the deployment of Ethiopian troops in Hiiraan, Galguduud, Bay, Bakool and Gedo. The Speaker of the Federal Parliament, Mohamed Mursal, vowed to hold those responsible for the arrest of Mukhtar Robow accountable. Tabling a motion to discuss the agreement the previous government signed with the government of Ethiopia will be a good start.