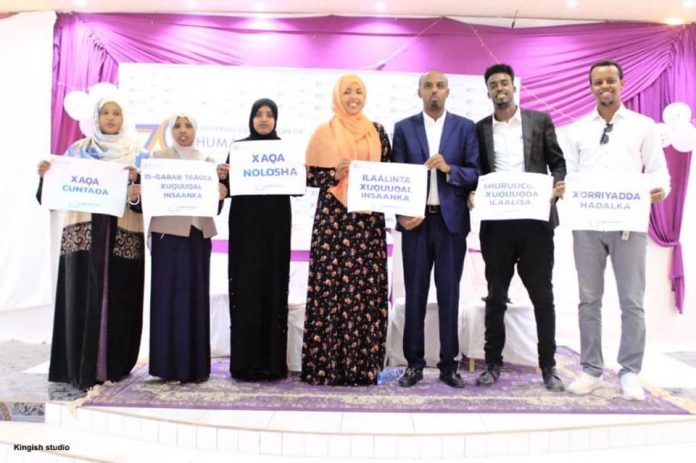 Worldwide, 10th December is celebrated to mark the date the Universal Declaration of Human Rights was adopted, in 1948. This year is the 70th anniversary of the Universal Declaration of Human Rights, which declared the inalienable rights which everyone is inherently entitled to as a human being – “regardless of race, colour, religion, sex, language, political or other opinion, national or social origin, property, birth or other status”.

Human Rights Centre held an event in Burao to observe Human Rights Day. Burao is the second largest city in Somaliland and is located in the eastern part of the country.

Aisha Ali Qabile, the regional coordinator of the Ministry of Employment and Social Affairs

Aisha Ali Qabile, the regional coordinator of the Ministry of Employment and Social Affairs, called on the public to stand with human rights, particularly minoritygroups, women and children.

“We warmly welcome the celebration. It is the first time such event is held in ourcity, Burao. We are thanking Human Rights Centre for coming to here,” the secretary of Burao local government, Osman Shiekh, said. “Somalilandconstitution upholds human rights. We have to all work toward its realization,”he added.

“Today we are marking the 70th anniversary ofan important document, the Universal Declaration of Human Rights, which wasadopted after the horror of the Second World War. Human rights did not startwith the Declaration, but the declaration represents recognition of nations tostrive towards protection of human rights,” Guleid Ahmed Jama, the director of Human Rights Centre said.

He added: “we should not watch and become bystanders when the rights of others areviolated. Each and every one of us has to be part of human rights defence andadvocacy. We should side with victims and tell the truth to aggressors.”

At the same time, HRC celebrated with the law students of the University ofHargeisa. Human rights defenders and activists encouraged the students toadvocate for human rights and raise awareness. Students, activists, academicsand other members of the public attended the event.

Different human rights issues were discussed in these events.

The objective was to celebrate with the rest of the world, raise human rightsissues in Somaliland and use for an awareness purpose. The Constitution ofSomaliland has a Bill of Rights and accepts the Universal Declaration of HumanRights.

This year also marks the 20-year anniversary of the United Nations Declaration onHuman Rights Defenders. Human rights defenders endure tremendous pressure andintimidations. The marking will elevate their work and will call on thegovernment of Somaliland to respect the work of human rights defenders as recognized in the United Nations Declaration on Human Rights Defenders.