Indian officials hailed the deal, which was signed during an official visit to the UAE by the country’s foreign minister, Sushma Swaraj, as ‘sig

The UAE has agreed to collaborate with India to launch joint aid projects in Africa.

Indian officials hailed the deal, which was signed during an official visit to the UAE by the country’s foreign minister, Sushma Swaraj, as “significant”.

The first step will be the establishment of an IT centre of excellence in Ethiopia.

The project will rely on Indian expertise in the area as well as funding from the UAE. Good will towards the UAE in Ethiopia, the result of the country playing a crucial role in brokering a recent peace deal with Eritrea, was a further factor in the project, the Economic Times, an Indian daily newspaper, reported.

The Indian Government’s ministry of external affairs confirmed that a Memorandum of Understanding (MOU), titled ‘development cooperation in Africa’, had been signed with the UAE. It will be only the second partnership deal India has agreed with a ‘third country’ in Africa, the other being an agreement with Japan. The UAE later also confirmed the agreements.

A second deal, titled ‘currency swap agreement’ and signed by the governor of the UAE’s central back, was also agreed with India.

Raveesh Kumar, an official spokesman for the Indian government, said “exhaustive discussions” had taken place between the UAE and India on the trip. Areas covered included energy, security, trade and space, he said.

Mrs Swaraj spent much of her visit with Sheikh Abdullah bin Zayed, the UAE Minister of Foreign Affairs and International Co-operation. She also met Sheikh Mohamed bin Zayed, the Crown Prince of Abu Dhabi and Deputy Supreme Commander of the UAE Armed Forces.

Mr Kumar, Ms Swaraj’s aide, said the visit had shown India’s “special relations” with the UAE. Discussing her meeting with Sheikh Mohamed on Twitter, he said both “expressed satisfaction at the pace of our bilateral relations in a range of areas, attesting to our comprehensive strategic partnership.”

The 12th session of the UAE-India Joint Commission Meeting was also held in Abu Dhabi, concluding on Tuesday.

At the event, Sheikh Abdullah noted the UAE’s “strong historical ties” with India. He said the close relations between the two countries are based on mutual respect, trust and aimed at enhancing the mutual benefit of the people of the two friendly countries, state news agency Wam said.

Both sides countries strengthened their resolve to combat extremism and terrorism in all its forms, regardless of the perpetrators and their intent, the Wam report stated. 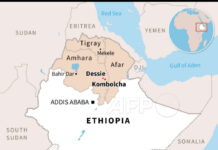 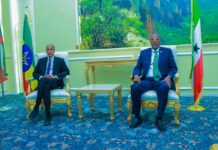 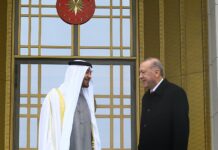