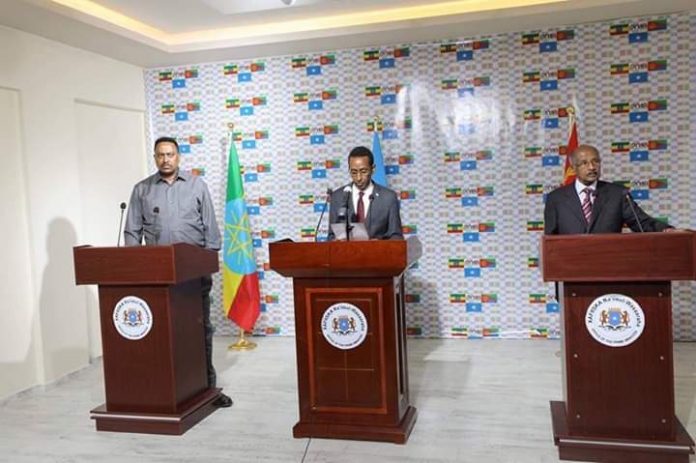 To this end, the three Foreign Affairs Ministers evaluated the progress of trilateral joint economic, political and security cooperation signed a month ago in Asmara, Eritrea. More importantly, the Ministers took note of the recent positive development in peace, friendship and cooperation and agreed to strengthen and advance these positive gain among the three countries.
Likewise, the three Ministers appreciated the political, security and economic reform performance of Somalia undertook recently and underscored their unwavered support and commitment to Somalia People and Leaders to ameliorate the advancement. Respecting the territorial integration and sovereignty of three country, the Foreign Affairs Ministers agreed to work together to achieve peace, security and economic integration of sisterly countries.

In their joint press statement issued after the discussion, the Foreign Ministers of Ethiopia and Eritrea reaffirmed their firm support for the government and people of Somalia. They also called upon the international community to support the government of Somalia to pursue much needed reforms and appealed to all stakeholders to work towards the peace and stability of Somalia.according to Ethiopian Foreign Ministry