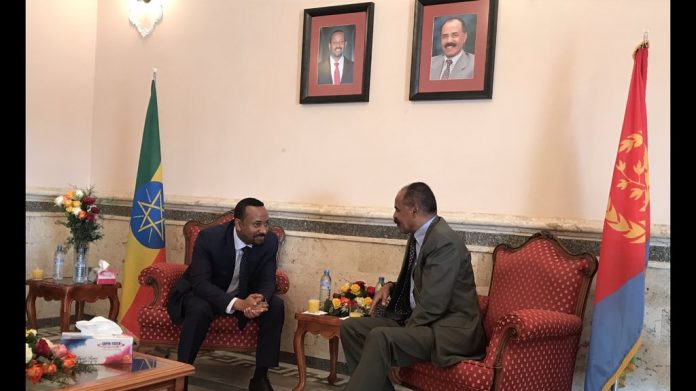 The visit comes after Ethiopia said it would fully accept the Algiers Agreement and the decision of the Ethio-Eritrea Boundary Commission (EEBC).

The Ethiopian chief of Staff of Prime Minister ’s office Fitsum Arega post on his twitter confirmed the two sides agreed on to restored after decades a direct international telephone connection between Ethiopia and Eritrea.

“For the first time after two decades, a direct international telephone connection between Ethiopia and Eritrea is restored today”Fitsum Arega

On the other hand, The reports from Asmara said the two Horn African countries after two decades of conflict and war to normalise relations open embassies in each other’s capital.

“Ethiopia will resume using Eritrea’s port,” Abiy said in remarks broadcast by both nations’ state broadcasters while the prime minister was attending a state dinner hosted by Isaias.