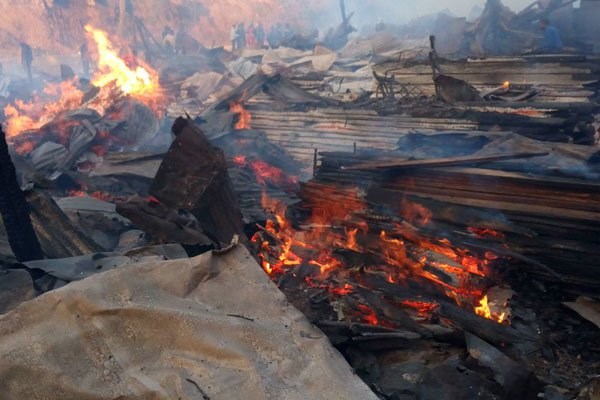 At least 15 people are feared dead and more than 60 injured after a night fire, once again, gutted a section of Gikomba in the capital Nairobi on Thursday morning.

Witnesses told the Nation that they counted at least six unidentified bodies that had been burnt beyond recognition.

9 MISSING
Some of the victims burned while others choked after inhaling poisonous fumes as they battled to save and salvage their property.

According to the Nairobi Regional Commissioner Kang’ethe Thuku, nine bodies have not yet been recovered from the scene of the fire.
Emergency service provider, St John’s Ambulance, said 70 others, mainly traders, were taken to Kenyatta and other city hospitals with burns.

Others were evacuated and treated by emergency service providers on the scene.

“At least 40 casualties evacuated by St John Ambulance following huge fire that gutted part of residential and market sections of Gikomba,” the emergency service provider said in a tweet.
The flames broke out at around 1am at Kwa Mbao area, according to the Kenya Red Cross, before spreading to other parts of the informal market.

The blaze that consumed timber yards and bales of used clothes intensified at around 2.30am Thursday and by 7.30am, firefighters from Nairobi City County Fire Brigade were still battling to put it out.
Mr Thuku, the regional commissioner, said the fire originated from a timber yard in the market but investigations are under way to establish its cause.

At least 15 residential apartments and several shanties affected, according to St John’s Ambulance.

The regional commissioner said they had set up a  multi-agency to search for bodies and survivors.

The team has disconnected power lines in that area to prevent further damage and danger to the recuse teams.

Mr Thuku said buildings in the area that contain explosive materials such as gas cylinders are also being cleared.
He urged the families of those affected by the fire to converge at a tent set up at the site to report what and whoever is missing.

Located in Majengo area of Kamukunji Constituency, Gikomba market, which is popular among second-hand-cloth buyers, has been experiencing fires every year since 2015.
Last year, President Kenyatta ordered investigations after two fire incidents rocked the market in a span of nine months.