In his remarks Dr. Kaba warmly welcomed the Saudi delegation, led by Dr. Hamad bin Abdulaziz H. Albattshan, Deputy Minister of Animal Resources of the Ministry of Environment, Water and Agriculture of the Royal Kingdom of Saudi Arabia. Then after, Dr. Kaba touched upon longstanding and the historical commercial, cultural and people to people ties between Ethiopia and Saudi Arabia that dates back to the Axumite period, a time which marks the relations between the two countries reaching its apex when the then Ethiopian King provided sanctuary to the companions of Prophet Muhammad from the persecution they faced under the rulers of the time in Mecca – an incident recorded as the First Hejira.

The 5th Ethio-Saudi JMC that commenced today, Dr. Kaba duly noted, is aimed further bolstering the multifaceted cooperation between the two countries that has been consolidated over the years by the signing of various cooperative agreements. In his keynote address, State Minister Dr. Kaba, has also emphasized “the right mix of opportunities for mutually beneficial partnership for trade and investment” Ethiopia has to offer potential Saudi investors. 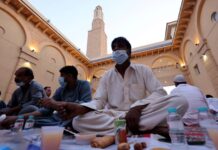