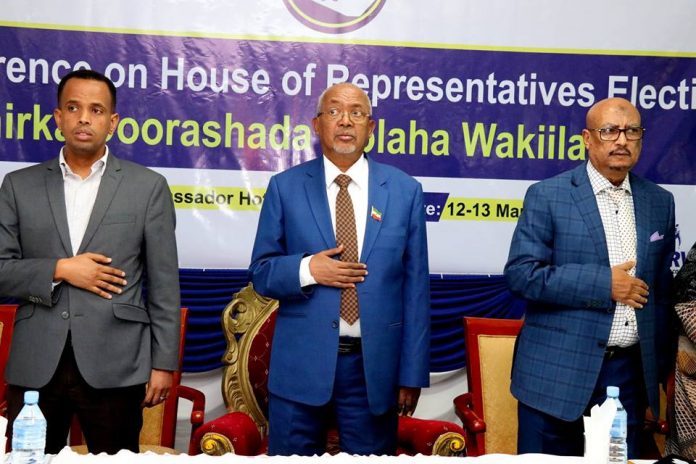 Introduction
Somaliland Non State Actors Forum (SONSAF) conducted a two-day consultative conference in Hargeisa,at the Ambassador Hotel, from 12th to 13th March 2018. The primary objective of the conference was to facilitate in depth discussions about the Somaliland House of Representatives election in 2019, with a focus on outstanding issues such as the women and minority quota, seat allocation, and complaints relating to
regional representation and generating options and policy recommendations to help concerned electoral stakeholders to put in place comprehensive election plans.

The conference participants addressed the role of women in political participation, considering the women’s quota as essential to integrate into the House of Representatives (HoR) election law. The quota for minority was also discussed, and participants suggested that minority political participation might require quotas to be integrated into the HoR election law.
Overall, the conference carried out in depth analyses and examined why the HoR election was postponed several times. The election was overdue, having been scheduled for September 2010, but the House of Elders had extended the HoR term twice, leaving the incumbent HoR members in post for an extra eight years without election. This went against the fundamental rights of citizens as stated in Article 22(1) of the
Constitution.

The conference participants were divided into five panels for separate sessions, with each panel discussing and examining both the challenges obstructing the HoR elections and the solutions. The participants raised public concerns over the postponement of the election. The conference was the largest ever gathering to discuss and investigate the issues surrounding the HoR election and quotas for women and minority.
The HoR election initiative was first suggested in 2016, when Somaliland civil society organisations, led by SONSAF, provided technical support to the HoR Sub-committee of Internal Affairs and Defence, which is mandated by the electoral laws in the HoR. This sub-committee had conducted nationwide consultations across the regions in 2016, aiming to understand the divergent views towards the HoR election and regional representation.

This led to a dialogue about the HoR election, with the conference as a follow up to consolidate discussions. In between these periods, SONSAF provided technical support to the HoR sub-committee. The HoR Election Law No.20-2/2005, was amended and a comprehensive new draft was prepared. Seat allocation provisions and quota for women and minority are the only unresolved outstanding issues of the law at the present time.

The conference raised important issues, including the lack of political commitment and the failure to conduct a national census in the aftermath of the 2005 election. Ultimately, this conference was an examination of matters of regional representation and quota for women and minority, and as a result generating options and policy recommendations.