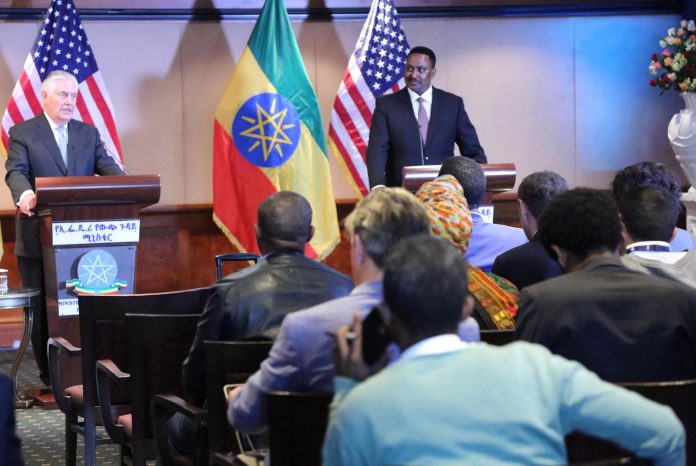 The U.S. Secretary of State, Rex Tillerson said today (March 08) that U.S supports the considerable reforms being carried out by the Government, “all of which we know you will succeed in achieving, ” adding that his Government recognized and shared concerns expressed by the Government of Ethiopia on the ongoing situations in the country and would also continue to commit itself to the “all-weather relationship even when cloud and storm gather.”

The Secretary of State noted this during a joint press briefing with his Ethiopian counterpart, Foreign Minister Dr. Workneh Gebeyehu in Addis Ababa, Ethiopia.

At the briefing, noting Ethiopia as an important country to start his visits with, Rex Tillerson said the century old relationship will be propped up more than ever mapping out new areas of cooperation as well as invigorating the old ones.

He dubbed Prime Minister Hailemariam Dessalegn’s resignation as “the first ever voluntary transfer of power” which is “a symbol of the strength of this young democracy.” Mr. Tillerson noted, “We have also seen Ethiopia’s Journey towards democracy. It is a young democracy. And as I’ve indicated democracy is challenging. It is not easy. It is not easy to take a country forward as democratic. And we are here to support Ethiopia’s journey towards democratic society and institutions.”

Given recent events in Ethiopia, Tillerson, called on the government and other stakeholders to refrain from violence. He said, “We encourage the Ethiopian people as well to maintain patience, to maintain support for your Government through this change.” “Violence is simply not a solution”, added the Secretary of State.

Recalling his discussions with Foreign Minister Dr. Workneh, the two sides have dealt in depth on ways of further bolstering issues of mutual interest on, health and peace and security giving particular emphasis to economy. During the discussion the U.S. has noted that it would support Ethiopia’s economic reforms to open up more business in the country and other institutions that would help further accelerate the growth in the country. He said that his Government will continue to assist nearly a million of refugees residing in Ethiopia and praised the Government for this. He commended Ethiopia’s efforts in its largest contribution to the Global peacekeeping as well as it unflinching support to regional peace and stability.

Thanking the U.S. Government for its efforts to understand the situations on the ground in this critical time, Dr. Workneh called his talks with his counterpart “cordial, candid and very fruitful.” He reiterated his Government’s continued commitment to work with the U.S. in areas of economic development and the promotion of peace and security.

Mentioning significant steps forward the two countries have been making in the area of peace and security, Dr. Workneh has urged the need to reinforce ties in economic and development arrays. The Minister has called on U.S. investors to take advantage of the attractive business and investment schemes his Government has put in place.