Somaliland today is widely regarded to have one of the most thriving democracies in East Africa. It held its presidential elections – the country’s third since 2003 – on 13 November 2017, electing a new president, Muuse Biixi Cabdi of the Kulmiye party.

Somaliland decides brings to life the spirit of those elections. The photos in this series, taken by British documentary photographer Kate Stanworth, explore citizens’ passionate campaigning and voting, as well as civil society’s role in preparing, observing and monitoring the process. They capture Somalilanders in action at polling stations, call centres, and on the streets – before, during and after the lively three-party contest.

Saferworld and SONSAF are proud to have played a part in Somaliland’s election history. We will continue to work alongside citizens and their new government as they look forward to building further steps towards recognition and democracy.

Find out more about our work in Somalia and Somaliland. Women chanting and singing joyfully as they wait for their leader’s address at an UCID rally in Hargeisa, 8 November 2017. The campaign period saw an intense outpouring of expression. Women were extremely visible during rallies, and were seen by the parties as an important demographic as it was believed that they formed the majority of registered voters. ©Kate Stanworth/Saferworld 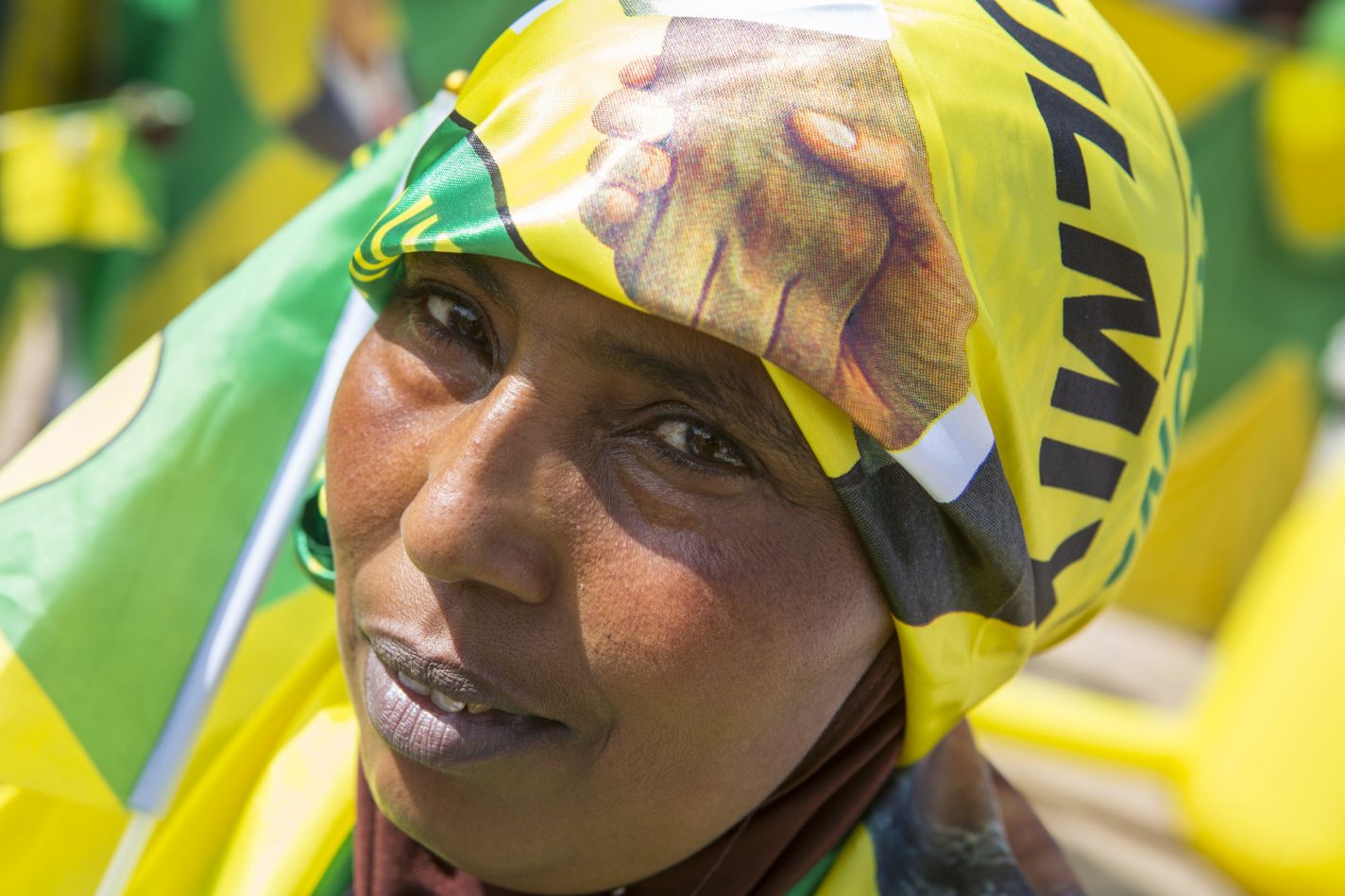 A Kulmiye party supporter at a rally in Hargeisa, 9 November 2017. The political parties gave out colourful party affiliated clothing, flags, umbrellas and banners to their supporters in advance of the rallies. Each day only one designated party was allowed to campaign, a rule created to avoid potential conflict and security issues. ©Kate Stanworth/Saferworld 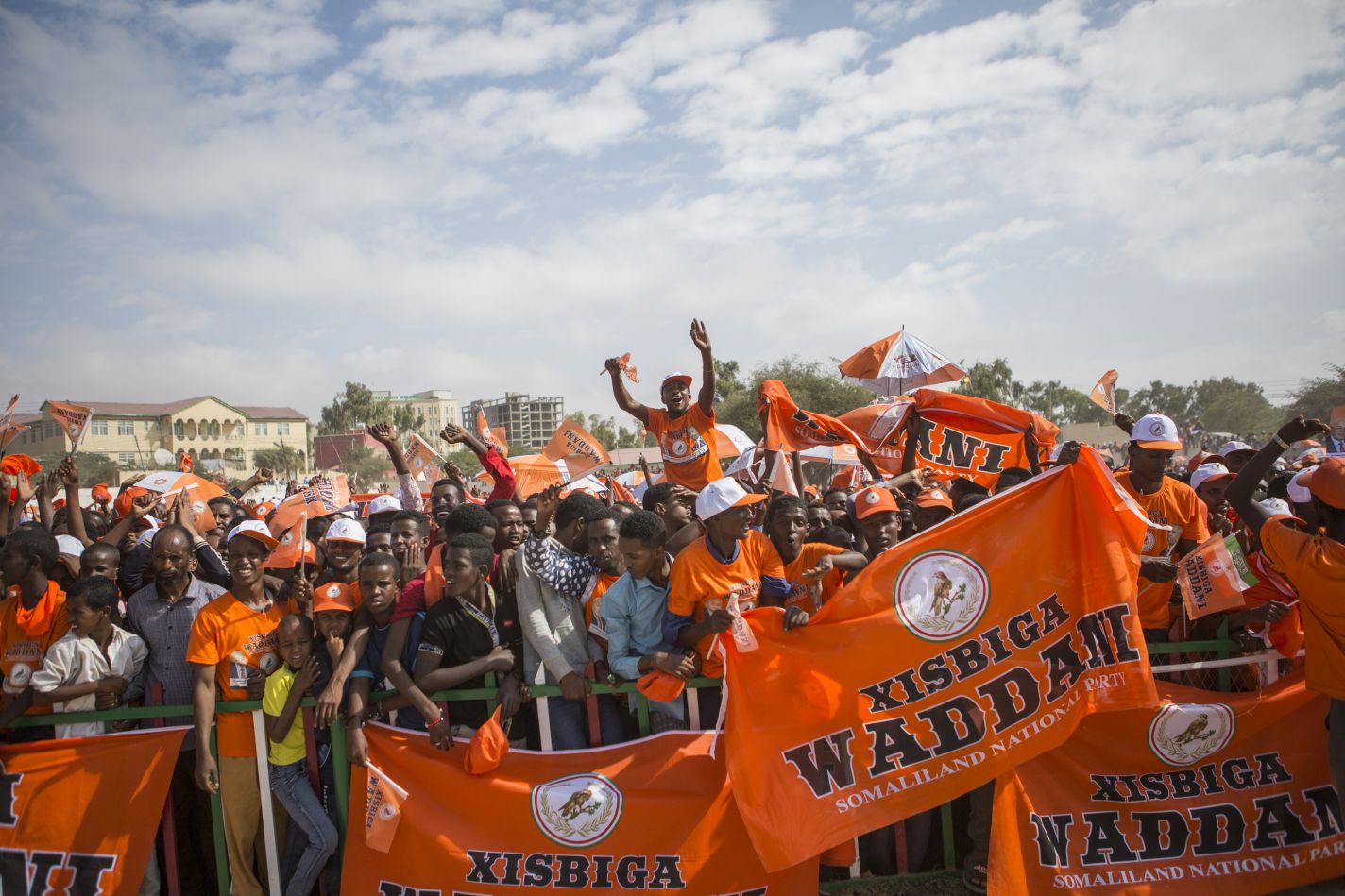 Young men at the a Waddani (Somaliland National Party) rally – some under 16 and therefore not yet old enough to vote – gather in Freedom Park in Somaliland’s capital city, Hargeisa, 7 November 2017. In a country where an estimated 70 per cent of the population are under 30, attracting the youth vote was an important imperative for the political parties. ©Kate Stanworth/Saferworld A boy on his way to join an UCID (Justice and Welfare Party) rally in Hargeisa, 8 November 2017. Young people in Somaliland have shown a strong interest in politics during the election campaigns. “The youth have energy, and for them politics is new,” says Abdirashid Abdilahi Farah, a 26-year-old domestic election observer. “Some are seeing their first election. In order to get their votes, all the parties say they have youth programmes and that they care about the young.” ©Kate Stanworth/Saferworld 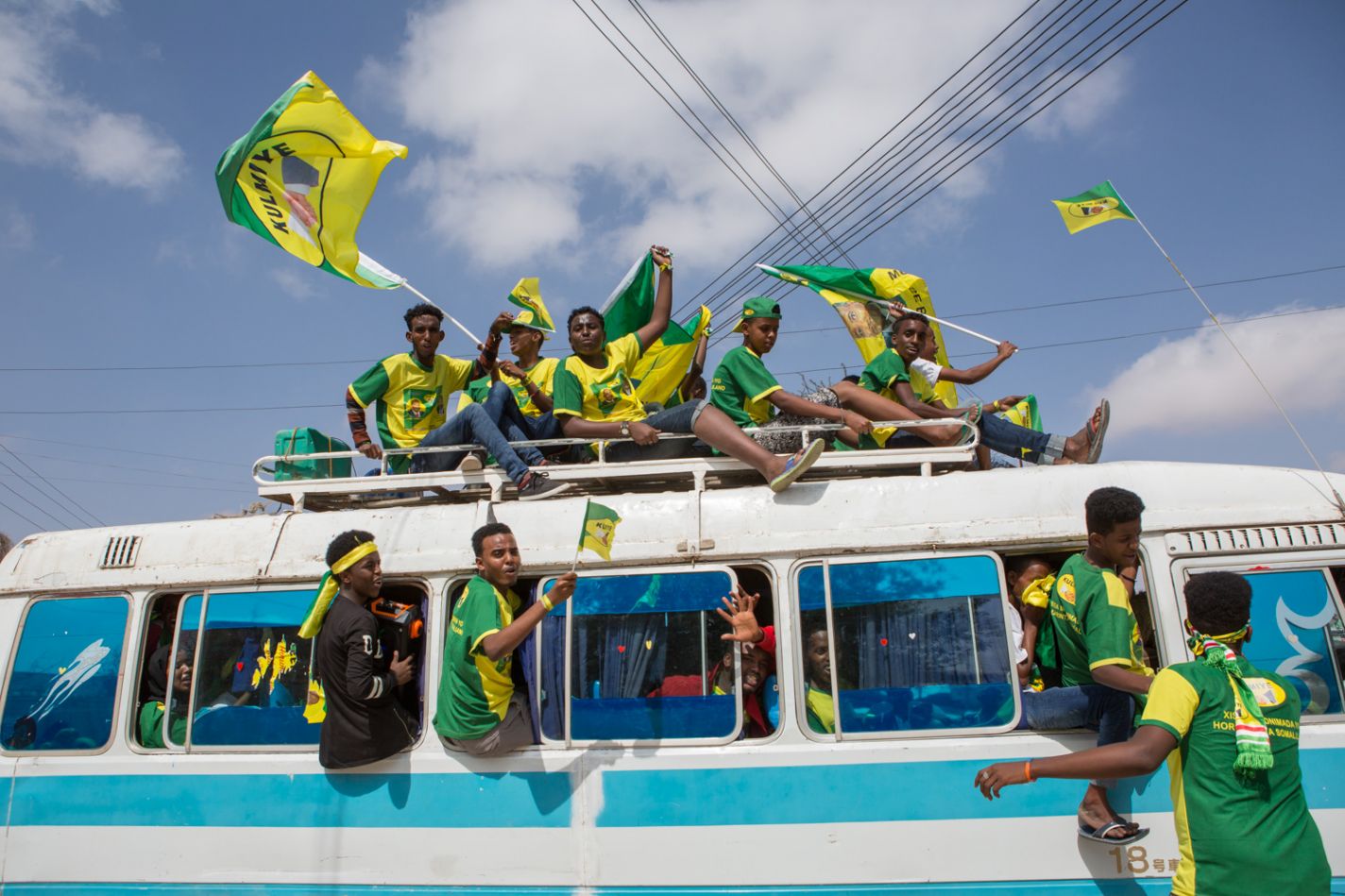 Supporters drive through the streets of Hargeisa blaring out party-promoting music and waving flags on the 9 November 2017 after the last rally of the ruling party, Kulmiye, before the Somaliland presidential elections 2017. The high volume of vehicles caused traffic jams stretching from the downtown area to the Kulmiye strongholds in the north of Hargeisa. ©Kate Stanworth/Saferworld 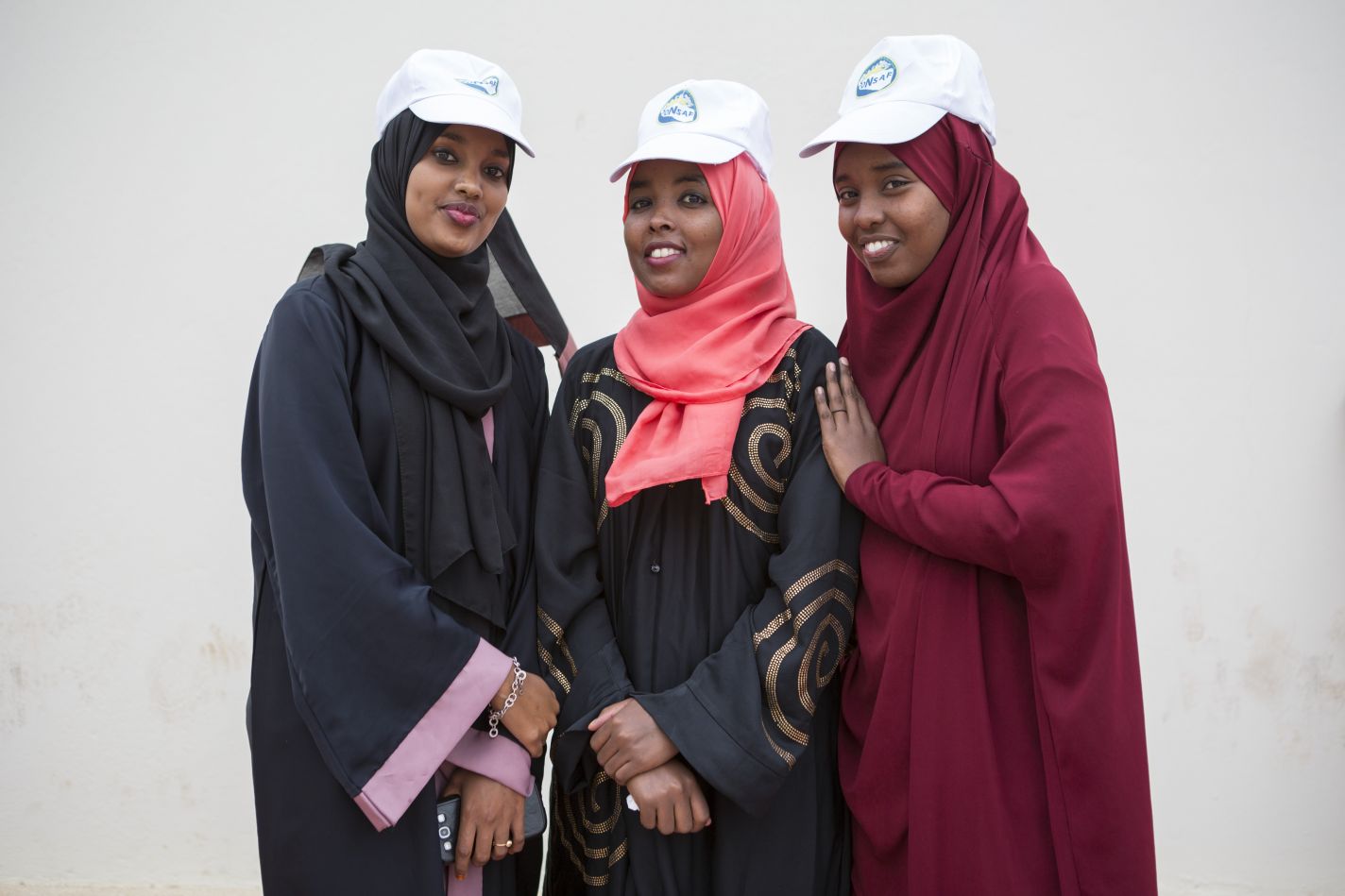 Domestic election observers during a training session in Hargeisa, 7 November 2017. They were part of a team of over 600 domestic observers who reported on polling day using a sophisticated SMS system. “Because we are an emerging country the world can see our democracy, so it’s important to show our process is fair and transparent,” says observer and student, Isir Guleid Hussein (not in photo). “Young people are very energetic and form a large part of the election observers. They want to learn and believe in contributing to their country,” said Ahmed Abdullahi Dualeh, project coordinator for the election observation, SONSAF. ©Kate Stanworth/Saferworld 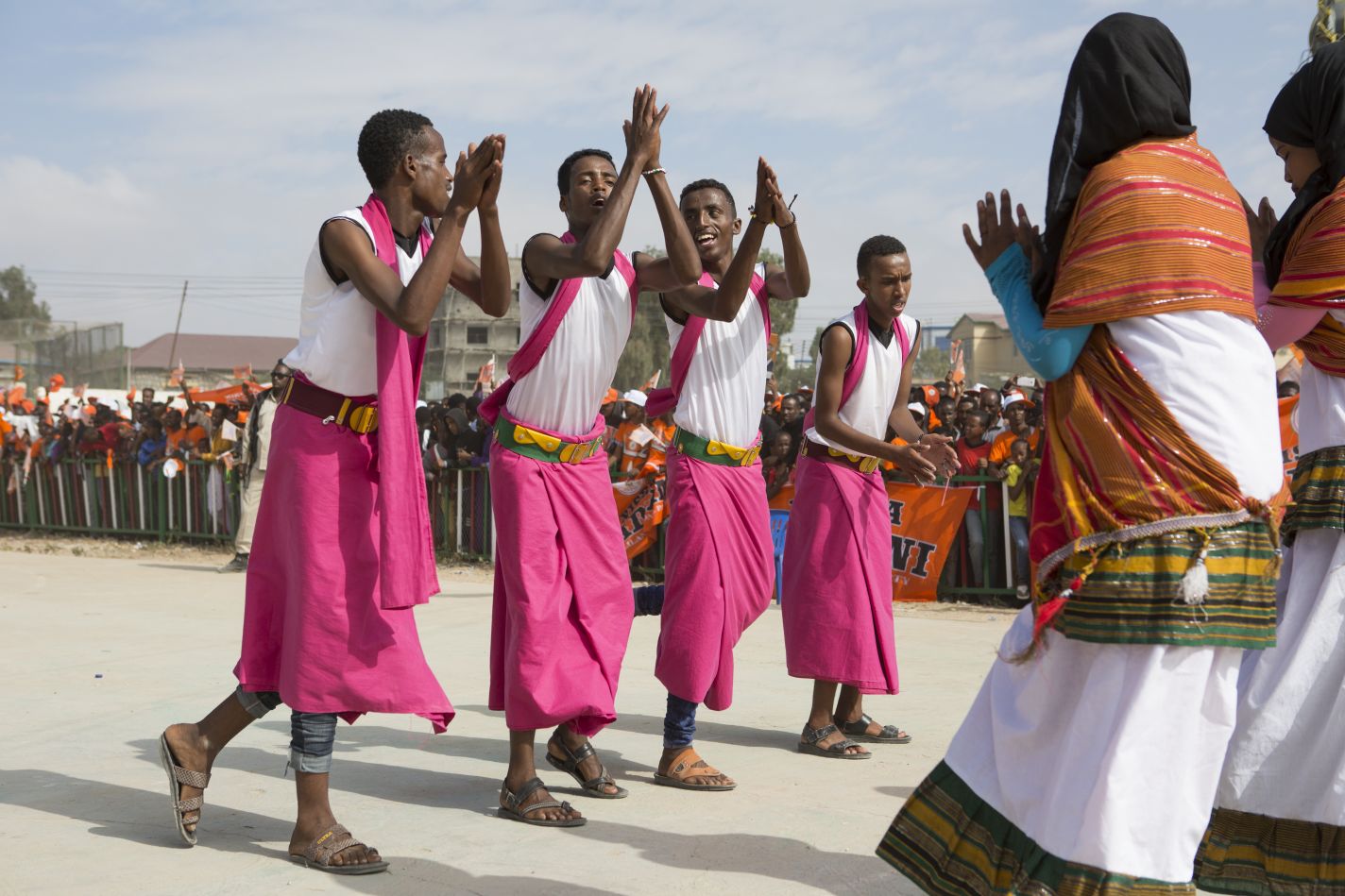 Traditional Somali dancers perform at a Waddani rally in Freedom Park, Hargeisa, 10 November 2017. Religious leaders expressed concern to the National Electoral Commission (NEC) about what they consider to be ‘un-Islamic behaviour’ during the campaigns, with the playing of music and men and women dancing together. The NEC however, let the rallies go ahead, arguing that the right to campaign is written into the constitution. ©Kate Stanworth/Saferworld Crowds gather at Freedom Park, Hargeisa, to support the opposition political party, Waddani, on 10 November, during the last rally before the 2017 Somaliland presidential elections. They sang ‘bye bye Kulmiye’ (referring to the ruling party) and ‘bedeluu’ an embellishment of the word ‘bedel’ meaning ‘change’. ©Kate Stanworth/Saferworld A woman speaks during a training session for female UCID party campaigners in Guleid Hotel, Hargeisa, 7 November 2017. “We learnt about acting ethically during the campaign, for instance, telling people to vote without nepotism, so that we are not clans, we are parties. We want to campaign about developing the country, bringing positive change for the poor and disabled,” said participant, Xukun Cali Daahir. ©Kate Stanworth/Saferworld Abdishakur Daud Mohamed, 29, Waddani party campaign team head of administration, photographed at the campaign call centre, the first of its kind in Somaliland. Abdishakur called voters across Somaliland to request their vote. “They ask what your candidate will do for them,” he says. “People commonly complain about lack of roads, poor water, poor education and poor health facilities.” “In previous elections people were voting along clan lines, but now they are asking political parties what their programmes are. This is in the early stages but this is the direction we want to see it going in.” ©Kate Stanworth/Saferworld Long queues outside a polling centre at sunrise, before opening time in southeast Hargeisa. Voters showed a great deal of enthusiasm, many arriving in the small hours of the morning to make sure of their place in the queue. In total 555,142 Somalilanders cast their vote out of 704,089 registered and with a voter card. This means the turnout for the presidential elections was 78.85 per cent (based on preliminary results). ©Kate Stanworth/Saferworld A woman casts her vote on polling day in southeast Hargeisa. International election observers congratulated Somaliland on carrying out a largely well-organised and peaceful polling day, stating: “Throughout the election period, Somalilanders demonstrated their support for the rule of law and constitutional process, voting peacefully and in significant numbers, and we applaud this ongoing commitment to peaceful participation in an impressively open electoral system.” ©Kate Stanworth/Saferworld Ciismaan, a domestic observer and disability activist, observes his local polling station on election day. “I am interested in checking accessibility for the disabled on polling day. This polling station is okay but others are not accessible,” he says. “We had a quota of disabled people – 20 people were supported by Handicap International and SONSAF, who trained them and helped ensure their access to polling stations,” said Ahmed Abdullahi Dualeh, project coordinator for the election observation, SONSAF. ©Kate Stanworth/Saferworld A young woman waits while a polling station official finds her on the voting register. Somaliland was the first in the world to use an iris-recognition biometric voter registration system to prevent electoral fraud. In the past there have been allegations that competing clans encouraged their members to register multiple times to increase their political influence. ©Kate Stanworth/Saferworld Workers at a call centre for the Domestic Election Observers Mission in SONSAF’s office, Hargeisa. “We are collecting data via SMS which is fed into the Apollo data system to collect and analyse the data,” says Emmanuel Oluka, an ICT consultant managing the data system for the domestic election observation. “The system uses SMS for the first time at an election in Somaliland. So far we have 95 per cent of the data, and the call centre are chasing up any that is missing. On election day we got 12,392 incoming SMS messages and there were 13,881 outgoing ones.” ©Kate Stanworth/Saferworld 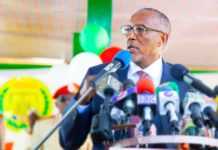