Three deadly bomb attacks in Somalia’s capital this month have highlighted the failings of a decade-long international effort to quash an al-Qaeda-linked insurgency in one of the world’s poorest countries.

While African Union troops helped the federal government drive the Islamist group known as al-Shabaab out of Mogadishu in 2011, the group has continued to stage assaults in the city. The U.S. blamed it for the country’s deadliest-ever attack — an Oct. 14 truck-bombing that left more than 300 people dead — while two weeks later al-Shabaab set off two car bombs that killed 26 people, including two former lawmakers.

The attacks are a predictable consequence of the government and African Union scaling back their fight against the militants, mainly because of limited funding, according to Christian Ani, an Ethiopia-based analyst with the Institute for Security Studies. The forces haven’t engaged in any major offensives since 2015, he said.

“Al-Shabaab continues to be a strong force in Somalia,” he said by phone. “It has a heavy presence around the Juba Valley and the outskirts of Mogadishu. It continues to pose a significant threat to the security of the country.”

Somalia descended into conflict following the ouster of President Mohamed Siad Barre in 1991, prompting the deployment of a U.S.-led United Nations peacekeeping mission that involved as many as 33,000 multinational troops. The U.S. pulled out after two of its helicopters were shot down and 18 of its troops were killed in Mogadishu in October 1993 and other UN troops left shortly afterward.

Al-Shabaab has waged its insurgency since 2006, when it split from the Islamic Courts Union, which controlled Mogadishu for about six months that year. The militants swore allegiance to al-Qaeda in 2012, while its supporters have carried out attacks on civilians in Kenya, Djibouti and Uganda.

The African Union deployed troops in 2007 to try and help stabilize the Horn of Africa nation and Uganda, Burundi, Kenya, Djibouti and Ethiopia currently provide the bulk of its about 22,200 armed personnel and police officers. The European Union pays troop allowances and other expenses, while the UN provides logistical support for the mission, known as Amisom. The U.S. has provided backing with drone strikes and limited special forces, and in May began deploying about a dozen troops from the 101st Airborne Division to train Somalia’s army.

In August, the UN Security Council approved the extension of Amisom’s mission until May 2018, while telling it to cut the maximum number of its uniformed personnel by 590 by the end of the year. The long-term objective was for Somalia’s forces to assume complete responsibility for security, according to the council’s resolution.

The truck-bombing showed Somalia needs more international assistance to combat terrorism, according to Moussa Faki Mahamat, the chairman of the African Union Commission. “It is now clear that without adequate and appropriate support to Somalia, many of the security gains made in recent years could be reversed,” he said in an Oct. 15 statement.

The protracted conflict with al-Shabaab, together with a devastating drought, have triggered a humanitarian crisis. About 6.2 million people, or almost half the population, are in need of humanitarian assistance, and 388,000 children below the age of five are acutely malnourished, according to the Norwegian Refugee Council. The World Food Programme estimates that about 73 percent of the population live on less than $2 per day.

Gilbert Khadiagala, a professor of international relations at the University of Witwatersrand in Johannesburg, said efforts to decimate al-Shabaab aren’t working and an approach that could involve engaging with some of the militants’ leaders is needed.

“It’s very difficult to defeat a guerrilla movement,” he said by phone. “The bombing in Mogadishu demonstrates that they are still a very powerful force. There will be more attacks of this nature. I see it as just the beginning of a new front in the war.”

— With assistance by Mohamed Sheikh Nor 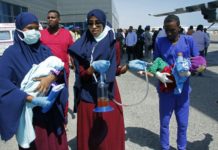 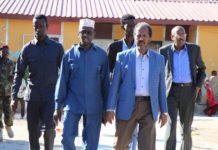 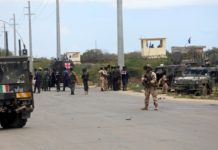 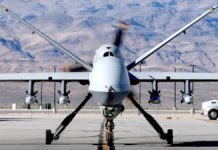