“OUR SOMALILAND” –CAMPAIGN FOR PEACEFUL ELECTIONS

Horndiplomat-Inspire Group and SONYO Umbrella are calling on political parties and their supporters to ensure peaceful campaigns across the country during the campaign period. We urge our political leaders to desist from inflammatory announcements that could incite fellow citizens to violence during the campaigns. We will hold them responsible for their actions. While individual responsibility is emphasized, we stress that political parties and party leaders must control the conduct of their supporters.

“OUR SOMALILAND” is a campaign calling on all parties in the political conflict to work together towards peaceful elections. Political parties should call on their supporters to maintain peace and tolerate each other during the campaign period. As political intolerance is not acceptable.

The chaos and violence that characterized the recent election campaign is highly regrettable. It must not recur in the November 13th Presidential Election. We call on the National Election Commission to strictly enforce the law to sustain the confidence of Somalilanders.

We call on Somalilanders to be watchful in the defense of their democratic rights and vote consciously to secure the future of our country. As the youth hold the future of this country. You must desist from being used as political tools of violence against each other or as agents of hate through social media. We urge you to use this platform to preach peace and influence positive change for Somaliland.

Elections are important for our democratic society and the nation is bigger than each of us. There will be Somaliland after November 13th, 2017. Let peace reign in every heart, in every homestead and every corner of our country.

We are emphasizing the need of a post-election follow up campaign in partnership with Somaliland National Election Commission support program designed to ease tensions between the election’s winners and losers. 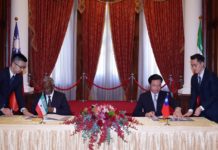