The US and Kuwaiti leaders voice optimism for a diplomatic solution to ongoing dispute between Qatar and its neighbours.

US President Donald Trump has offered to mediate in the three-month diplomatic dispute between Qatar and its neighbours, saying “we will be most successful [against terrorism] with a united” Gulf Cooperation Council (GCC).

Speaking at a joint news conference with Kuwait’s emir in Washington, DC, on Thursday, Trump said he supported Sheikh Sabah Al Ahmad Al Sabah’s mediation efforts, but if that did not manage to resolve the Gulf crisis, he would be “willing to be a mediator”.

What can Russia do to help end the Gulf crisis?
“I think it’s something that’s going to get solved fairly easily,” he said.

“We call on our GCC and Egyptian allies to focus on our commitments at that Saudi Arabia summit to continue our joint efforts to drive out and defeat terrorists.

“Qatar, Saudi Arabia, the United Arab Emirates, Bahrain and Egypt are all essential US partners in this effort. We have great relationships with all of them right now, maybe better than we’ve ever had.

“We will be most successful with a united GCC.”

‘Hope has not ended’

Kuwait has been acting as a mediator since June 5, when Saudi Arabia, the UAE, Bahrain and Egypt announced they were severing relations with Qatar and imposing a land, sea and air blockade against it, accusing Doha of supporting “terrorism”.

Qatar has strongly denied the allegations and denounced demands made by the blockading countries as attempts to infringe Qatar’s sovereignty.

On June 22, the Saudi-led group issued a 13-point list of demands, including the shutdown of Al Jazeera, limiting ties with Iran, and expelling Turkish troops stationed in the country as a prerequisite to lifting the blockade.

Doha rejected all the demands.

Speaking at the White House press conference, Sheikh Sabah said he had received a letter from Doha saying that Qatar was ready to discuss the list of demands with the quartet, without, however, negotiating anything that would undermine its sovereignty.

“We know that not all of these 13 demands are acceptable,” the emir said, referring specifically to issues that affected Qatari sovereignty.

“A great part of them will be resolved,” he said.

“I am optimistic that the solution will come in the very near future. The hope has not ended yet.”

The United States has given mixed signals on its policy to the Gulf crisis.

Trump immediately expressed staunch support for Saudi Arabia after the Arab states announced sanctions against Qatar, but some other US officials, including Secretary of State Rex Tillerson, adopted a more measured tone.

Marwan Bishara, Al Jazeera’s senior political analyst, described what was said by the two leaders at the press conference as a “positive” development in the diplomatic crisis.

“The US president was quite restrained – he didn’t use any inflammatory language and didn’t escalate his declarations against any particular country,” Bishara said.

“The key thing is where Trump stands on this [GCC crisis].

“Clearly, he didn’t make single negative statement in this press conference, unlike previous conferences, which means he is either restraining himself under pressure from the Kuwaitis, or he has actually been convinced otherwise that they all need to sit down and figure it out because, at the end of the day, this is a political problem that requires a political solution.”

Bishara said Trump’s offer to act as a mediator also suggested a change in the US president’s approach to the crisis.

“For Trump to say ‘I support the Kuwaiti emir in his diplomacy and if it doesn’t work I am ready to step in and bring them all to the White House’, this is a different language than the language that we heard before.” 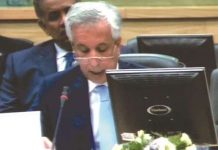