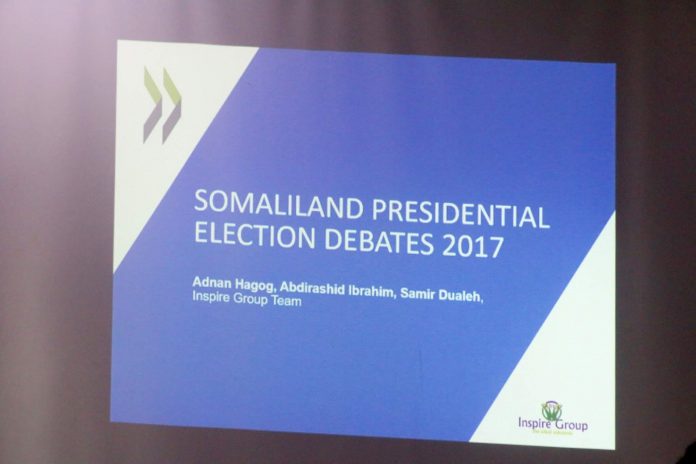 As Somaliland remains a rare example of functioning democracy in the Horn of Africa. Somaliland will have its first ever Presidential Election Debates in 2017, organized by Inspire Group.

Somaliland Presidential Election Debates will increasingly see both domestically and internationally as benchmarks of a healthy and maturing Somaliland democracy. People often view debates as an indication of an open, transparent election process where all candidates can compete equally. Voters are also able to see issues they are concerned about addressed by candidates during debates and hold them accountable for past actions. All these factors can contribute to the overall legitimacy of an election process, said Abdirashed I. Abdirahman a board member of Inspire Group.

Somaliland Presidential Election Debates 2017 will be televised and will become an increasingly influential among voters, impacting opinion polls that reflect their performance the following day. The presidential debate is generally considered the last big opportunity to move voters before the election. They offer rare moments for Somaliland population to do some head-to-head comparison shopping between three candidates on the same stage discussing the issues.

Debates can also provide a chance for candidates to commit publicly to peaceful elections, including agreeing to accept election results or using non-violent legal channels to resolve election disputes rather than calling supporters to the streets

Samir Dualeh, a board member of Inspire Group emphasized that the Debate will provide an opportunity for political rivals to show that despite their differences they can treat each other with mutual respect even while they disagree on the issues. This role in lowering tensions begins even before the debate.

The committee have had its first meeting today. They discussed and reviewed the debate processes, road map and code of conduct.

The objective of the debate is to promote inclusive democracy in Somaliland, political level playing field and reducing tensions and tribalism by facilitating neutral platform where all parties involve, said Dualeh.