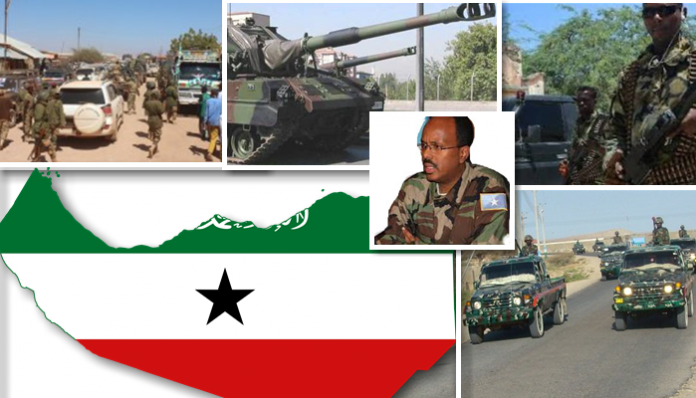 There are more than 80,000 voters registered for the election, as it is the highest turnout in the history of Somaliland elections. The people of eastern regions realized that theory of United Somalia failed, and Somaliland is their future.

However, this democratic process unfortunately angered the leaders of Somalia including the nominated President Mohamed Farmajo, who organized activities against the voter registration process in eastern regions by authorizing illegal armed activities by the Northern Regional Administration of Somalia (self-named as PUNTLAND).  Farmajo authorized such illegal activities during his recent visit to PUNTLAND.

PUNTLAND sent and sponsored armed militia into Somaliland international border to obstruct the voter registration process in Sool and Sanaag regions. Somalia claims the ownership of Sool and Sanaag (eastern regions of Somaliland) based on tribal bases.

Somaliland National Army (SNA) is on high alert against such infiltration and securing the voter registration centers.

The international community should take the lead of pressurizing the administration in Mogadishu to stop such illegal activities, and support the democratic process in Somaliland, where people express their will freely unlike the regime in Mogadishu who is under the protection of the African Union.

If international community neglects such illegal intrusion, the consequence will be a full-scale war between Somaliland and Somalia, which could harm the regional stability.

Somalia should learn from Somaliland in democracy, peace and state building instead of disturbing the progress in Somaliland. After declaration of Somaliland in 1991, Somaliland disarmed thousands militias, built democratic state, restored peace and all forms of Social Service without outside support, in other hand, Somalia is unable restore peace and create decent life to its citizens for more than 26 years with assistance of international community.

It is important to highlight that Somaliland conducted four free and fair elections including presidential, municipality and parliament. Total of four presidents ruled Somaliland through elections, and peaceful power transfer unlike rest of the region.

The government of Somaliland is currently sponsoring all the expenses of the election along with the United Kingdom (UK) who supports the elections technically.  USA, UK, EU, AU, Arab League and Civil Societies applauded the free elections in Somaliland.