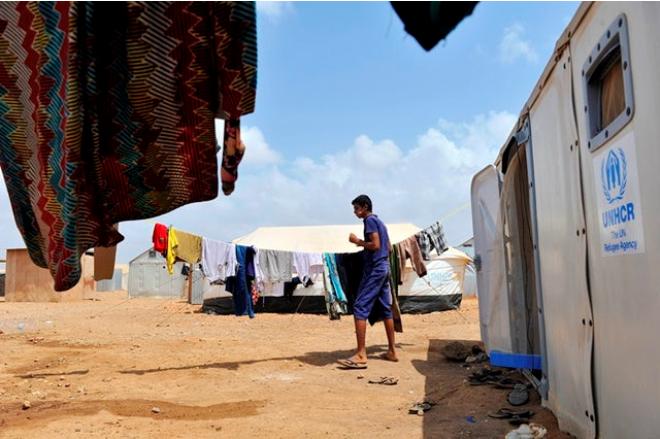 Smugglers have twice forced African migrants off their boats near Yemen this month, leaving dozens to drown. Fatima Mohie-Eldin from Muftah explains the two deadly episodes and looks at why young Ethiopians and Somalis are still trying to sail to war-torn Yemen.

On August 10, 160 Ethiopian migrants were violently forced overboard by human smugglers off Yemen’s coast, leading to the death of six people.

The tragic incident came only a day after 120 migrants from Ethiopia and Somalia were forced overboard in a similar event, with 50 presumed dead, according to a statement released by the International Organization for Migration (IOM).

Following the first incident on August 9, IOM staff unearthed 29 shallow graves on a beach in Shabwa, a Yemeni governorate along the Arabian Sea coast. The deceased had been buried there by friends who survived the deadly event. IOM staff also found the six bodies of those who had drowned on August 10, washed ashore. Many are still missing following the two incidents and are presumed dead.

According to survivor testimony recorded by IOM, in both cases smugglers pushed people overboard as they approached the coast of Yemen, after spotting what appeared to be security forces.

Survivors detailed the inhumane conditions they faced throughout the trip, including being forced to squat the entire time, not moving for fear of being beaten or killed, and in some cases having their hands tied to prevent them from running or swimming away if something unexpected happened.
Despite the dangers, many young migrants from Ethiopia and Somalia, most of them under 18, are still making the journey from the Horn of Africa to Yemen, hoping to reach wealthy Gulf states. In fact, IOM estimates that approximately 55,000 migrants have traveled along this route since January 2017. That number is likely to double by the end of the year.

Faced with dire economic and environmental prospects at home, including high rates of unemployment, severe droughts and food shortages, many young people are hoping to find a better life in the oil-rich Gulf countries, including Saudi Arabia, Qatar, Kuwait and the UAE.

Yemen has become a popular way of reaching those states. Instability caused by the country’s civil war means fewer border controls and security restrictions, making it easier for migrants to enter Yemen and continue onward undetected. Unfortunately, however, many of those who survive the sea crossing have found themselves caught in the midst of the conflict before ever reaching the Gulf.
As IOM Yemen chief of mission, Laurent de Boeck, has noted, most of these migrants are teenagers who are often unaware of the severity of the conflict in Yemen. Even with prior knowledge, however, many young migrants still choose to make the journey. According to a recent article in NPR, some migrants as young as 12 years old have made the crossing two or three times after failing to reach the Gulf on their first attempt.

Taking advantage of the collapse of Yemen’s infrastructure, many criminal networks have been able to act with impunity, endangering countless refugees and migrants as a result.

As reported by the Washington Post, U.N. spokesman Stephane Dujarric has called on international bodies to bring an end to the human smugglers’ exploitative practices. In an impassioned plea, Dujarric implored the international community to “increase legal pathways for regular migration and offer credible alternative to these dangerous crossings for people in need of international protection.”

This article originally appeared on Muftah, and the original can be found here. To receive

Muftah’s alternative reporting and analysis on important global events, sign up for its Weekend Reads here.